From Newcastle rocker to Silicon Valley: How Damien Mahoney took $5 million social media platform Stackla to the US 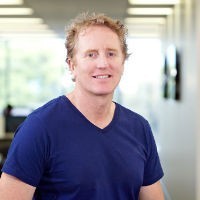 Stackla founder Damien Mahoney says there are plenty of crossovers between the life of a rock star and that of an entrepreneur.

“There is nothing much harder than getting up in front of an audience and playing music you’ve written, it requires a lot courage,” says Mahoney.

“Like being an entrepreneur, you have to know how to work hard.”

Mahoney lived the life of a struggling muso for four years in Newcastle during the early 90s, when seminal Aussie rock bands like Silverchair were finding success in the scene.

Although his band “wasn’t quite good enough to break through” like his mates in the Screaming Jets, Mahoney says being a musician prepared him for many of the same requirements as the life of an entrepreneur.

“Playing original music, you have to be creative, I’ve always thought that it’s better to create than to copy. I also learned practice makes perfect. We’d practice religiously and always be prepared. Those things are pretty similar [to the life of an entrepreneur].”

After giving up the pursuit of a career in music, Mahoney got a break in his second greatest passion: Aussie rules footy. While he never inherited his dad’s sporting prowess on the field (his dad Bill was a Socceroo in the 1950s), he snagged broadcasting roles at the AFL and Ninemsn, as well as a footy commentator gig on Triple M.

But when he was offered a conflicting role at the NRL, Mahoney says he found himself at the fork in the road of his career.

“I chose the AFL because I loved it, even though it paid a tenth of the other job,” he recalls, admitting the decision at the time was somewhat “naïve and stupid”.

But choosing passion over pay eventually worked out for Mahoney, who was subsequently inspired to launch a digital platform for footy clubs that allowed them to curate all their social media content in one place. That idea turned into Stackla in 2011, as Mahoney and his business partners, Semin Nurkic and Peter Cassidy, realised a singular platform that aggregated all social media mentions together offered a unique proposition for any brand.

Fast-forward just three years and Stackla now turns over $5 million, growing 300% in the last year alone. The company employs 30 people in offices in Sydney, London and San Francisco and lists Manchester United and the US operations of Target among its clients.

Mahoney, who has just moved to San Francisco with his family to further grow the business, chats to SmartCompany about his new life in Silicon Valley and the challenges he faced getting there.

Mahoney is an early riser, generally getting up around 6am for a jog around his new hometown before the day begins.

“The first thing I’ll do after that is turn on my phone and see what emails have come in over night. We have offices in London and Sydney so things happen 24 hours,” he says.

Having only been in San Francisco a few weeks now, Mahoney says he is settling in relatively quickly to a new routine and a new city.

“I guess there’s a lot of the similarities between San Francisco and Sydney. There’s a similar style of people, a climate that’s similar, they are both relaxed coastal towns,” he says.

Due to his move, Mahoney has had to take a step back from Stackla’s day-to-day operations.

“My role has changed quite a bit in last few months. I’ve had to be less hands on than I have been in the past,” he says.

“At the start you’re the account manager, the HR manager, the sales guy, the product guy. I’ve been able to extract myself from that a lot these day to focus on directing traffic.”

Mahoney says letting go of some roles has had its challenges, but he believes delegating responsibilities is easier when you trust your team.

“Generally our philosophy is that we hire the best people and then let them get on with it. We don’t believe in micromanagement. We find that the best way to manage people is to allow them to put their own stamp on something,” he says.

One of Mahoney’s new tasks has been managing investor relations after Stackla gained some notable investors last year when it raised $2 million to fund its global expansion, including venture capital firm Rampersand, new media investor and entrepreneur Tony Faure and business commentator and entrepreneur Alan Kohler.

“Having them onboard has been a real vote of confidence,” says Mahoney.

Despite the success, he admits the journey to get Stackla off the ground did hit some roadblocks.

“We bottomed out first quarter. Our revenue was really poor and we weren’t getting any customers. We needed to get better at selling our product, something I’d never done previously, it was a massive challenge,” he says.

But Mahoney says by the end of 2013, Stackla had turned its fortunes around and the lessons they’d learned in the process were priceless.

“Out of necessity comes a lot determination. That challenge was really what made us.”

Mahoney is still working out his new work-life balance in San Francisco, but believes entrepreneurs have to know their own limits.

“I think there is only so much you can put in before you start to become ineffective or it’s not good for your mental health or your stress levels,” he says.

“Exercise is an important part to manage that.”

While Mahoney says he makes time with his family the priority, the self-confessed sport nut likes to do “anything with sports” in his down time.

“I’ll still watch every Hawthorn game when the season starts of course,” he laughs.

And having left his band Gibraltar behind in Sydney, Mahoney says he’s on the look out for some new musos to play with in the Valley.

“I’ll have to get a band together. The place we’ve moved to, Marin County, is famous for creative people and full of famous musicians, so it shouldn’t be too hard.”

Mahoney says 2015 will be all about growth for Stackla.

“We’ve laid the foundations to grow our revenue and customer base, so now it’s about taking advantage of the numerous opportunities we hope will present themselves,” he says.

He says the company will be looking at possible business partnerships with “tech businesses with similar interests” and says while an IPO is currently not the on the radar, he has learned to “never rule anything out”.

Looking back and recalling set backs in his life, including having to sit his Year 12 exams twice to get the score he wanted, Mahoney says he believes persistence and consistency is the key to entrepreneurship.

“When you look back at the series of things you’ve done, you realise you’ve worked pretty hard to get where you are,” he says.

“You realise you do have a bit of that entrepreneurial spirit to go out and try stuff on your own.”