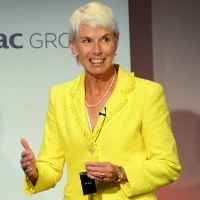 Gail Kelly has resigned after seven years as the chief executive of Westpac.

The bank announced yesterday morning it has appointed Brian Hartzer, current chief executive of Australian Financial Services, who will succeed Kelly from February 1, 2015.

Kelly, who was the first female chief executive to lead one of the country’s big banks and a regular feature on Forbes’ list of the most powerful women, told media yesterday she won’t be taking on another executive role when she leaves Westpac, choosing instead to focus on her many other global commitments.

“I don’t think in this day and age one ever retires in the sense that you think: Retiring means I’m going to go put my feet up at home,” Kelly said.

Last year Kelly was appointed to the board of the Group of Thirty, an elite group convened to consider international economic and financial issues. She is also one of the global advisers on the board of the United States Council on Foreign Relations and is vice-president of the International Monetary Conference. She will move into the presidency of the global banking conference in 2016.

Kelly is also CARE Australia’s Ambassador for Women’s Empowerment and is a member of the Prime Minister’s Indigenous Council.

Corporate heavyweights and politicians have applauded Kelly’s leadership today, pointing to the way she guided Westpac through the global financial crisis and, according to the bank, more than doubled Westpac’s market capitalisation from just under $50 billion to around $104 billion.

So what can SMEs learn from Kelly’s career? Here are five leadership lessons from one of the most powerful women in corporate Australia.

Kelly is a strong advocate for more women in corporate leadership and her advice to other professional women is to back themselves.

“My advice and counsel to women … is back yourself, be prepared to have a go, be prepared to put your hand up before you think you are ready for a role,” Kelly said this week.

“There are people out there who want to support you, ask for the opportunities. Dig deep when those opportunities come your way and have a go. Use all those talents that you have of listening and taking feedback on board and growing every single day.”

Kelly started her working life as a school teacher in her native South Africa, before turning to banking in 1980. She held senior executive roles at other banks including the Commonwealth Bank before taking on the chief executive role at St George Bank in 2002 and then Westpac in 2008.

“All of those were really big step ups for me,” she said this week.

“In lots of ways, at the time I was appointed I really didn’t think I was ready for those jobs. But that’s the thing; you grow into jobs like these.”

In a speech to the St George Bank Foundation in August, published by Fairfax this week, Kelly said leaders have a choice about the way they view the world.

“This does go back to living in a small family, a happy family, in Pretoria and the very positive influence of my mum and my dad, particularly my dad, who was inherently a very optimistic person,” Kelly said.

“He had that wonderful flavour of, you can choose in your life how you respond to situations and you should actively choose to be positive, to see the world through a glass-half-full perspective. You should choose even in difficult times to look for the learning, the insights, the opportunities, the next steps.”

“And it’s a life skill, not just a business skill.”

4. Focus on people and culture

Speaking yesterday, Kelly said what she is most proud of at Westpac is the culture that has developed under her leadership.

“This is a wonderful organisation made up of people who deeply care about the customers that they serve and deeply care about the communities in which they operate, who understand the vision of the organisation and set about every day to make a difference to customers and every day to make a difference within the community, to do the right,” said Kelly.

5. Learn how to communicate

“It is important to be able to communicate in a crystal clear way the vision and purpose of the organisation,” Kelly said in August.

“This is how banks lost their way going into the [global financial crisis]. What for them was shareholder value, being successful in financial terms, [but they] lost sense of the way: what is the purpose of the bank, in society, why do we exist.”

“At Westpac, our vision is to be one of the most respected companies in the world: helping our people, our customers, our communities to prosper and grow. The communication of this is key. I talk about it everywhere and expect our team members to know and understand our vision and strategy.”