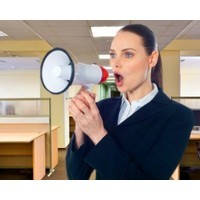 When Apple founder and CEO Steve Jobs was first diagnosed with cancer in 2003, he kept it quiet for months until after he had undergone surgery, at which point he sent a letter to employees saying he was “cured”.

Jobs died of cancer in 2011. This explains why ever since Google founder Larry Page began to miss conference calls and speeches last year, investors have been asking pointed questions about his health.

On a Google+ post yesterday, Page finally answered their questions about why he’s been avoiding some speaking engagements.

“About 14 years ago, I got a bad cold, and my voice became hoarse,” he wrote. “My voice never fully recovered.”

Page was diagnosed with left vocal cord paralysis. And last year, following another cold, he was informed his right vocal cord was now also not functioning as it should.

“Thankfully, after some initial recovery I’m fully able to do all I need to at home and at work, though my voice is softer than before. And giving long monologues is more tedious for me and probably the audience.”

The news no doubt came as a relief to Google investors. The stock was up 3% when American markets closed this morning.

But the loss of a powerful speaking voice is no small cost to a public, heavily-scrutinised CEO.

Numerous studies have found we associate deep and steady voices with authority, and distrust those with higher tones.

“On conference calls and other situations where you can’t see the person, I’m sure the importance of vocal tone becomes even more important.”

But your voice isn’t something you can change too much, Gardner says. When he coaches executives, he teaches them to take deep breaths to feel relaxed instead.

“When someone is in a stressful situation, their voice becomes high-pitched. Through deep-breathing, that can be controlled. But other than that, you’ve just got to work with what you’ve got.”

Following his public disclosure, Page took the stage for an hour at the Google IO conference yesterday.

“I had this notion that this stuff should be very private, and I think at least in my case, I should’ve done it sooner,” Page said.

Gardner says if he had to coach an executive with Page’s condition, he would encourage them to disclose sooner rather than later.

“I think generally you find with older people – and I mean those 45 and over – they think there’s this demarcation between their work and their personal life.

“But being open gives you an opportunity to share your struggles, and so can make you a more effective and engaging leader.”

“Given Page’s position in the technology industry, this is an opportunity for him to tap into the most creative resources out there to show he can still communicate a story. He can still deliver a vision, a message a story, even if there are times when he loses his physical voice.

“It could work to enhance his reputation as an innovative and creative leader.”

And anyway, Posus says, he takes those studies about deep voices being more authorities with a grain of salt.

“There are plenty of soft-spoken leaders. You don’t need to speak loudly or forcefully, you just need to learn to speak effectively.”

This harkens back to something Page wrote in his original Google+ post.