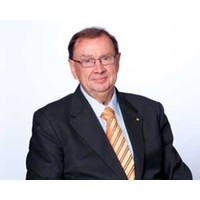 “We’re a bit like McDonald’s, in a way,” he says. “When you go to McDonald’s, all you have to work out is how hungry you are. You either have a Big Mac or a ‘little mac’. Why is McDonald’s so successful? Because they make it easy for their customers. So we say to our clients: ‘What is it that you need and we can fit it’, rather than ‘Here’s what we do and you fit in with us’.”

Media buying was not a stand-alone business in Australia before Mitchell made it one. Ad agencies used to buy media space – in newspapers, on TV, on billboards and so on – on behalf of their clients. When Mitchell set up Mitchell & Partners (now Aegis Media) in 1976, he introduced the idea of the middle man who could buy in bulk to reduce prices and keep a cut of the savings.

Mitchell believes in a single focus when working on a project. He explains: “If somebody comes to me and says, ‘We have developed four options’, I say ‘why’?

“We’ve had clients who think they need several options. I say, ‘I can give you one good one and three bad ones.’ Wouldn’t it be better if I came to you with the right one?”

While answering a question, Mitchell draws triangles on a notepad in his South Melbourne office to illustrate a point. He applies the same strategy he offers his clients to his company – the whole team climbing one major mountain, not six small ones. And he plans for the long term.

“So when there’s been an economic downturn, we’ve been able to maintain our service and build market share even though we may have sacrificed short-term profit,” he says. “However, when the economy’s turned for the better, we were at a much high level than our competitors who were scrambling to get staff and resources. We don’t wait and see what happens – we decide what we want to happen.”

Mitchell says companies fall apart because they lack focus, long-term planning and deviate from their core activities. It’s something he knows from experience. “Sometimes company leaders forget the businesses they’re in – the core operations,” Mitchell says, reflecting on his own near-death financial experience. In the early 1990s, he ended up with a $32 million debt as a result of signing four personal guarantees on loans involving investment projects that eventually went bad.

It is a classic mistake for a company to make expensive acquisitions when it isn’t ready, able and equipped to handle new businesses. Typically, when the numbers from an acquisition don’t meet expectations, especially on the back of mounting debt, the cost-cutting starts. Inevitably, the company loses skilled and experienced staff – often to competitors keen to expand their market share – and it struggles to survive.

In Mitchell’s case, he invested in the Big Banana theme park at Coffs Harbour in New South Wales. It brought him to the brink of personal bankruptcy until media magnate Kerry Packer provided him with a $1.9 million interest-free loan.

Mitchell recalls: “I signed four guarantees and I refused to run away. Other shareholders and directors ran away. I spent the next seven years fixing it, which included paying Kerry back. Our company Mitchell & Partners wasn’t at risk, but I was personally at risk. Without Kerry’s support, I may have been bankrupted.

“The lesson I learned is not to get involved in things you know nothing about. Don’t do big business outside your core activities. It’s a recipe for disaster.”

Climbing out of the grave

After his brush with financial death, Mitchell recovered to build a company employing about 1100 staff, serving 4000 clients, while consistently generating media billings above $1 billion a year and now edging closer to $2 billion.

It was in the wake of the global financial crisis in 2010 that Mitchell pulled off a masterstroke by selling his ASX-listed company to English media firm Aegis for $A363 million. The Mitchell family owned 40% of his ASX-listed company, but Mitchell opted to take mostly Aegis scrip rather than cash. After the sale, Mitchell was appointed to the Aegis board and became executive chairman of the firm’s Australian arm.

Opting for Aegis scrip rather than cash proved a shrewd move, as Japanese advertising company Dentsu Inc bought Aegis for £3.16 billion in July 2012. Mitchell confirmed his 4.2% stake in Aegis is worth about $A200 million – almost doubling his money in two years.