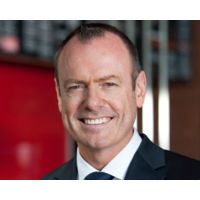 Motivation: “If you’re an entrepreneur, every day you’re at the mercy of your own ability. What you earn is what you can create.”

Top tip for leadership: “It’s a team result, but the vision and strategy is up to me and my leadership team. So I feel a sense of responsibility to deliver.”

In his 26 years at the company, Domino’s chief Don Meij has done pretty much everything.

He’s delivered pizzas. He’s managed a store. He’s run his own Domino’s franchises. He’s been a corporate executive, steering the company through an IPO and 11 successful years. And at the end of it, he’s still there, leading the business he knows so intimately. He could be for a while. After all, he’s only 44.

The pizza business was something he stumbled into, he tells LeadingCompany, from the company’s Brisbane headquarters.

While at university studying to be a teacher in 1989, Meij began delivering pizzas in Queensland for local chain Silvio’s Dial-a-Pizza.

“I got towards the end of my degree and realised I didn’t want to teach,” he says. “There were nine months until I could start a new degree. So I took up a store management position in the meantime.”

Meij never went back to university. From store manager, he went on to be a business supervisor, then the operations manager of Silvio’s. The business expanded and Meij’s responsibilities grew with it.

In 1993, Silvio’s bought Domino’s, which at that stage existed only in Sydney. He ran the Domino’s stores and, two years later, the Silvio’s outlets were absorbed into the Domino’s brands.

Meij had always wanted to be an entrepreneur, and with this done, he saw his chance. He gave up his executive job and became a Domino’s franchisee. By 2001, he owned 17 stores, and was the company’s single largest franchiser.

“I didn’t want to just tell people how to run their business, but to physically do it at a store level,” he says.

“And, I could see there was a lot of money to be made. It’s hard to become wealthy from wages. But if you’re an entrepreneur, every day you’re at the mercy of your own ability. What you earn is what you can create.”

Today, Meij has gone back into executive roles. He owns a lot of the company, having rolled his franchises into the broader business in 2001, when he became chief executive officer after a year in the chief operating officer role.