How I became chief executive of an island: Meet former Olympian Glenn Bourke who heads up the $250 million business Hamilton Island 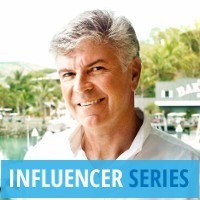 Since 2008, the now 54-year-old Bourke has been chief executive of Hamilton Island in the Whitsundays and he says it is a multifaceted job; one day he is the commercial manager of multiple hotels, restaurants, an airport and a marina and the next he is the mayor of the Hamilton Island council.

A classic Australian holiday destination, Hamilton Island was purchased out of receivership for $150 million by Rich List winemaking family the Oatleys in 2003. Since then, the Oatleys have invested $300 million in the island, which turns over a combined $250 million annually. Hamilton Island employs 1200 employees and operates four hotels, 13 restaurants, an airport, a marina and an 18-hole golf course.

Glenn Bourke has the rare distinction of being CEO of an island.

But I needed to grow up and do something more tangible so I got the job as the communications and venue manager for a sailing venue. Then I became part of the Sydney Olympics organising committee and did a four year term with SOCOG between 1996 and 2000. Along with a number of senior executives, I looked after the Sydney East precinct, which included sailing, volleyball and a number of other sports.

In 2000 I was asked to become the chief executive of the Cruising Yacht Club of Australia in Sydney. I was there for a short period before moving to Germany and managing Germany’s Illbruck Challenge team for the Volvo Ocean Race. I was there for two years and then Volvo asked me to manage the Ocean Race, which I did for five years.

I was a little homesick after eight years away, including five in the UK, and I thought it was a good time to come home.

The Oatley family rang me and said we have this island we’ve purchased and we think we can turn it into something special. Would you mind giving us a hand?

It was quite a revelation. I had been in events management but not in hotels or tourism resorts. I said ‘is that an issue?’ They said ‘we trust you and your reputation and we believe you’ll act in our best interests’.

I visited the island and looked at the capital they had injected into it. I thought this would be a really fun challenge. And I have been here every day for the past seven-and-a-half years.

My job is multifaceted. There is never a boring day. I look after the whole island and am responsible for the airport, the marina, four hotels, 13 restaurants, a range of activities, and the council as well.

We organise and allow business development on the island and we do our own development from time to time. We also have an 18-hole golf course which we own and operate on the nearby Dent Island.

Some days I am the mayor and other days I am a commercial operator.

Sailing teaches you a lot of good lessons in decision-making that are borne out in business.

It is a cerebral sport that teaches you to weigh up risk versus gain. In different situations, you have to risk more to gain more, while in others you don’t have to take big risks. If you are rolling along well, you refine and perfect.

My other work experience has also been quite beneficial. Working for SOCOG gave me a great operational perspective. It was a massive juggernaut that had to be delivered within four years by a particular date. The delivery date never moved but you had to be ready.

Since buying Hamilton Island, the Oatleys have invested more than quarter of a billion dollars.

The island has undergone a series of refurbishments. We’ve built the brand new Qualia hotel, the golf course on Dent Island. We’ve built a Yacht Club and a large club and conference centre, which is an architectural masterpiece. And we’ve fixed a whole lot of things too.

The Oatleys bought the island from receivers and so needed to uplift a lot of simple things, like the roads and power system.

When I first came here they were halfway through construction for a lot of things but when we came out at the end we went almost straight into the global financial crisis. It wasn’t easy; the tourism market had evaporated.

But we were improving our reputation so we held the status quo. We didn’t have the same dire times as others.

But since coming out of the GFC, we’ve seen massive growth. We’ve really been flying.

I describe the phase we are in now as polishing the diamond. We are building a multi-dwelling development at the moment that will house 22 villas and we will build more grand homes too. We also have a hotel that was previously turned into staff accommodation and we are now thinking of turning it back into a hotel, which will mean building more staff accommodation.

We expect to spend around $25 million on capital expenditure each year, half on new developments and half on upgrading existing facilities.

We’ve also just been given approval to build a new development on Dent Island, which will include 36 grand homes, 172 apartments and a 110-room hotel.

We had been thinking about how we could evolve and develop Hamilton Island and spread some of the load to Dent Island, which is just 500 metres away. The Queensland government has approved the plans and we’re looking for investors at the moment.

We have a short-term budget but a long-term plan and those two things marry into each other to some degree. As a family-owned company we also have more flexibility than a public company and can make decisions a little quicker.

In my mind the best marketing tool is still word-of-mouth. If someone visits Hamilton Island and enjoys the experience, they will tell their family and friends and you can’t beat that authentic view.

I’m optimistic after this month’s budget that Australia’s deficit will be able to be pared back in quite a significant way.

But it worries me in politics that maybe we make political decisions with the aim of garnishing votes that are not in the best commercial interest of companies.

If this government can administer this budget and reduce the deficit in four years, we’ll come out in a very strong way with only a little bit of pain.

I think people will be more optimistic this year. Let’s hope so.