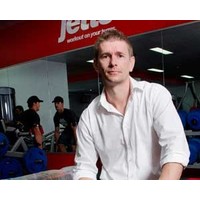 This growth has been fuelled by a canny business model that’s cheap to run and has proven popular with customers.

Jetts offers no-frills, 24/7 fitness centres. Members are given cards which they swipe to access the gym, which is frequently unstaffed. Each gym has one franchise owner, and one staff member. This lean set-up allows Jetts to operate with lower membership fees.

Companies that grow so fast often topple over, felled by debt, a lack of cash-flow, or poor business judgement. Jett’s managing director Adrian McFedries, who joined Jetts as a director 2010 and is now the managing director, is well aware of the dangers. He talks a lot about maintaining discipline.

“With a lot of fast-growth companies… they become a victim of their own growth,” he says. “They have to make a conscious decision to either keep growing quickly, or support what they’ve already got.”

McFedries would know. Before he bought into Jetts in 2010, he ran his own consulting practice, DC Strategy, which advised franchisors about strategy and management. He sold out of that in 2009, and joined Jetts six months later.

“It was an appropriate next step for me,” he says. “Jetts wanted someone with a few years of experience and high-level relationships in the sector. I’d built a great company, but it was time to move on.”

Jetts currently has 199 clubs open across Australia and New Zealand. On December 21, the 200th club will open. By 2030, the company aims for Jetts clubs to number in the thousands.

The company will face plenty of competition in that goal. The fitness industry is highly competitive, and in recent years, several high-profile chains have suffered setbacks.

Global gym chain Fitness First, which offers a full service including classes and other add-ons, announced in July this year it will have to close a quarter of its Australian gyms as it struggles to deal with $890 million in debt from its British parent company.

McFedries says he “respects the landscape”, but he doesn’t focus on it. “There are enough things for us to focus on in our own business.

“If we’re going to be successful in any given club, 99% of that will be due to things we can control.

“Also, remember we grew this business in the middle of the global financial crisis. It’s not like we’re not used to dealing with a tough economy.”

McFedries expects market trends to benefit Jetts and similar companies. “All around the world, there’s a large structural adjustment going on in the fitness industry,” he says. “There’s a movement away from very large, full-service clubs with pools and everything, to more suburban, no-frills clubs. Which is what we are.

“There’s room in the market for both, but the sloppy end of the large-format club market won’t fare well. Likewise, if you overreach with the [Jetts’] 24/7 model, that won’t work either.”

McFedries stresses that profitability is more important the sheer number of clubs. “I’d take half the growth if it was more profitable.” He says he’s happy that despite the fast growth, Jetts remains discerning in its business choices.

“It’s all about discipline,” he says. “You’ve got to remain really disciplined on selecting locations, and on picking good business owners. If you slip up – and lots do – you put your business in danger.”

“We walk away from a lot of locations because we don’t think they’re good enough. And the last 10 locations we’ve walked away from, nine of them have been taken over by other operators.”

Jett’s high growth hasn’t come haphazardly. It’s been the result of careful planning. Two years ago, the company aimed to have 200 clubs by December 2012. “We’ve got 199 clubs. Every quarter we were only three or four off.”

In recent years, the company has also put more focus on supporting existing clubs through its head office, which has swelled from employing eight people to 40 since McFedries took over.

“We provide massive support,” McFedries says. He says Jetts’ business performance managers – specialist consultants who help Jetts’ franchisees operate more successful clubs – each support a third of the number of franchisees their counterparts do at Jetts’ competitors, which means they have more time to devote to every club. They run monthly or bimonthly meetings with all franchisees to lift performance. “It’s some of the most comprehensive support that’s available in Australia. We focus with them on both performance and culture, and celebrate success.”

It’s easy to see why this is crucial given how lean Jetts is. Divide its revenues by the number of employees, and you get $2 million a head.

“If you’re not disciplined, you end up attracting people for the sake of it … It’s very easy for the standard to drop.”

To keep standards up, the company has ditched the standard resume and focused instead on marathon job interviews, which often go for two or three hours.

“We want to see the journey that is someone’s career,” McFedries says. “But the main difference between what we do now is we explore the key competencies that sit behind a role. We go through specific scenarios, which we might spend half an hour workshopping with the candidate.”

The company is also quick to fire if, after 90 days, a recruit isn’t working out. “Someone who’s not quite good enough won’t become good on day 91,” McFedries says. “If it’s not working, sure it’s painful, but you have to say so. A lot of businesses drag that out. But there’s never a convenient time to let someone go.”

“Don’t use the word ‘don’t’. It really discourages your team from thinking.”

“You need to make sure everyone enjoys the journey.

We take every single person who works for us to a yearly conference. This year it’s in Fiji. At each major function, we let everyone bring their family. We have ‘walk away from business’ days, where we take our leadership team away to work on stuff that’s not in the business plan.

You can get a lot out of unstructured time. People appreciate it. It’s good for them, and so good for us.

We all get to know each other pretty well.”

“Attitude – it’s the most important thing by a country mile. The second key part of I think is key is a real commitment to learning. They should be keen to learn up from their superiors and down the hierarchy too.

The last thing is maturity. If I had to choose from between two people, I would choose the one who has a higher emotional maturity. They should be open to ideas and accepting of feedback.”

“The All Blacks rugby team. They’ve maintained such unbelievably high standards for such a long time.”