How Pope Francis set the tone in one simple speech 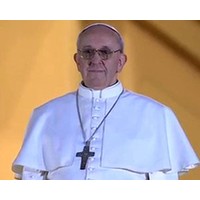 There’s a lot of firsts about the newly elected Pope Francis, whose ascension was announced in Rome in the early hours of this morning.

He’s the first pope from Latin America, the first to take the name Francis, and the first Jesuit to lead the church.

The former Archbishop of Buenos Aires is also the first in recent centuries to take the place of a living predecessor: Pope Benedict was the first pope to resign voluntarily in more than 700 years.

The new Pope is not expected to be an upstart. The 76-year-old been described by Vatican watchers as a compromise candidate: unlikely to shake up the Vatican, but also bearing a reputation for social justice concerns.

Nonetheless, it hasn’t been business as usual at the seat of the Catholic faith. For leaders, the most interesting aspect of Pope Francis’ ascension is the surprising way he’s chosen to present himself to his 1.2 billion followers.

He greeted the crowds from that famous balcony at St Peter’s Basilica wearing a simple white cassock, shunning the regal red ermine-lined stole typically used for such occasions.

“The simplicity of it was very striking,” the Catholic Archbishop of Brisbane, Mark Coleridge, said this morning on ABC Radio. “It underscores the unusual quality of the man in charge.”

The Catholic Church knows how to make use of pomp and spectacle to inspire reverence and respect. The Vatican, especially St Peter’s Square where the crowds waited for the new Pope to appear, is lavish and impressive. This makes Pope Francis’ attire all the more surprising. Melbourne’s Catholic Archbishop, Denis Hart, remarked on the “contrast between the majesty of the setting and the simplicity of the figure”.

Pope Francis also used his speech to signal another papal innovation: he started by bidding the crowd good evening, and at the speech’s conclusion, said he hoped they would sleep well.

“It was tremendously warm and engaging,” Hart said. “Once he started to engage with people, you could see their faces change.”

The new Pope even made a joke, smiling as he told the crowd the cardinals went “almost to the end of the world” to find a new pope.

The use of the name Francis is also highly significant. St Francis of Assisi may be one of the most well-recognised saints of the Catholic cannon, but has never had a Pope named for him before. The son of a wealthy Italian cloth-merchant, he gave away his worldly goods and lived in poverty, spending his life preaching on the streets and caring for the poor. Choosing his name, one none of the cardinals could have expected, sends an important signal about the new Pope’s priorities.

Pope Francis has broken the mould, masterfully and subtly signalling a change in style for the papacy. What all this signalling will mean in practice will be fascinating to see.