From panel-beater to CEO: How Ray Malone saved AMA Group from the brink 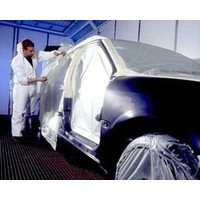 “He’s really good,” says Ray Malone as a staff member exits the room after delivering our drinks. “He’s a really hard worker. He does a good job.”

If succeeding in business is about having great staff, as Malone insists it is, he’s got reason to be thankful. In the three years Malone has been CEO of AMA Group (it stands for Automotive Aftercare), the company has gone from dire circumstances to steady growth.

In 2010 (the year after Malone took over), the company’s revenues from continuing operations rose 14.2%. The next year (2011) saw another 5% revenue growth, and this year, it added another 12.7%. The share price has increased tenfold – from 4 cents to 40 cents. It rose further in October after Malone and the group’s chief operating officer, Ray Smith-Roberts, both signed five-year contracts with the company.

How does he do it? “It’s not rocket science,” Malone says. “You’ve just got to get on with the job and actually do what you say. It’s dead easy.”

Malone is not the normal fit for a CEO, nor did he come to his position in the usual circumstances.

The 52-year-old was orphaned at 11. He moved to the country to live with an aunt and uncle, and moved back to Melbourne two years later. He attended school until year 9, and then did a spraypainting apprenticeship.

After a few years, he convinced Dulux to try him in sales. “I got a car as part of the packet,” he laughs. “That was a compelling offer at that stage.

“When I went into sales, went around visiting shops, I saw how all these people who didn’t even have a great grasp of the English language were doing very well. So I thought, these guys are having a go – I’ll do the same.”

Mr Gloss built up a reputation, and in 2006, it was bought up by Allomak, the company that would become AMA Group.

In the years leading up to 2009, Allomak bought up 13 businesses in the automotive aftercare market. The structure meant that the acquired companies kept operating as separate businesses as vendors to the parent company. After Allomak bought Mr Gloss, they kept Malone on as head of its panel division.

But not all was well at the parent company.

Page one of four. The story continues over the page.