How Romney won the debate: Lessons for leaders 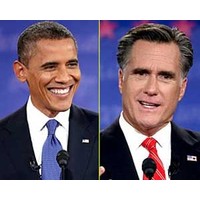 Almost immediately after the first US presidential debate on Wednesday, practically every major news outlet declared Mitt Romney the outright winner over Barack Obama. Having watched it myself, I have to agree.  Romney cleaned Obama’s clock.

As I was watching it, I thought of that scene in The Untouchables where Kevin Costner’s Eliot Ness says to Sean Connery’s Malone, “I want to get Capone.  I don’t know how to do it.”  Malone gets in Ness’s grill and snarls back, “You wanna know how to get Capone? They pull a knife, you pull a gun. He sends one of yours to the hospital, you send one of his to the morgue. That’s the Chicago way! And that’s how you get Capone.”  Romney played the role of Malone at the debate.  He brought the firepower.

Thinking that there might be a leadership lessons blog post in there somewhere, I took a couple of pages of notes during the debate about my impressions. Both men’s performances demonstrated the adage that it’s not so much what you say as how you say it. Even with two pages of notes, I couldn’t tell you a whole lot about the substance of what either candidate said. The impressions that landed were about who was in command and who had a plan. On those fronts, Romney blitzed it.

While most leaders don’t find themselves in one-on-one debates in front of an audience very often, there are broader leadership communication lessons that can be drawn from both Romney’s and Obama’s performances.

Here are some points on how Romney won the debate and what leaders can learn from how he did it:

Have a game plan:  In watching the entire debate, it was clear Romney had a game plan coming in, and he executed it for the full 90 minutes.  Obama, on the other hand, appeared to be improvising.  There were a lot of pre-debate media stories about how many weeks Romney had spent preparing for the first debate.  It looked like they were right.  He proved that preparation pays.

Remember the rule of first impressions:  What percentage of Americans do you figure are paying attention in the 80th minute of a debate? Somewhere between slim and none would be my guess. In a debate – as in any other presentation – first impressions are critical.  Romney had a very clear idea of the impression he wanted to make from the opening handshake forward.  I’m not a Romney supporter but to me he came across as smart, articulate, energetic and appropriately passionate.  I don’t think any of that was an accident. Romney had a clear picture of the impression he wanted to leave and followed through on it.

Know the points you want to make:  Obama got to go first with his opening statement and I thought he had a good line about it’s not where we’ve been, but where we’re going. Then Romney opened with a couple of stories about people he’s met on the campaign trail who have asked, “Can you help me?” and then ticked off a five-point plan for how he’d help those people by improving the economy. It wasn’t so much what was in the five-point plan as the fact that he had a five-point plan, and delivered it within the two-minute time constraint. He came across as more specific and action-oriented as a result.

Illustrate those points with stories that connect:  Throughout the debate, Romney illustrated his points with short stories about real people he could assist. Relevant stories get the listener’s attention and Romney played that to the hilt. While Romney was talking about real people struggling with thousands of dollars, Obama talked about trillions of dollars of revenues and expenditures. Effective communicators use stories and examples that the average person can relate to.

Sum those points up with memorable phrases:  There was a lot of pre-debate speculation about whether or not Romney would come in with a collection of zingers like Reagan’s classic, “There you go again.” He didn’t really deploy a lot of zingers but what he did do was repeat and emphasise his major points with short memorable phrases like “my priority is putting people back to work in this country”, “trickle down government” and “$716 billion in cuts to Medicare”.  Leaders have to make it easy for people to remember what they want them to remember.  Well-crafted turns of phrase repeated regularly help a lot.

Play offence:  Romney played offence throughout the debate. He made his points clearly and repeatedly and put Obama in a position of having to respond to what he said. Obama seemed to show up without a plan to take the fight to Romney. It was remarkable that in a debate about domestic economic issues, Obama did not raise the video tape of Romney saying that it wasn’t his job to worry about the 47% of Americans who don’t pay federal taxes. Given the fact that he’s such a basketball aficionado, it’s surprising that Obama didn’t play offence. You have to put points on the board to win the game.

Energy above all: Finally, Romney won the debate with energy. He was amped (at some points almost over-amped) throughout the evening.  In the split-screen shots, you could see that he was almost always directing his remarks straight at Obama. Obama, on the other hand, spent most of his time addressing the moderator. The problem, of course, is that he’s not running against Jim Lehrer; he’s running against Mitt Romney. To communicate effectively, leaders have to show through their body language, their tone of voice and their energy level that they’re engaged. Romney did. Obama: not so much.

History shows that incumbent presidents often have poor performances in their first debates and then come back strongly in subsequent performances. It will be interesting to see what happens in the next two debates.

In the meantime, what’s your take on the performances at the first debate? What leadership communications lessons did you see?