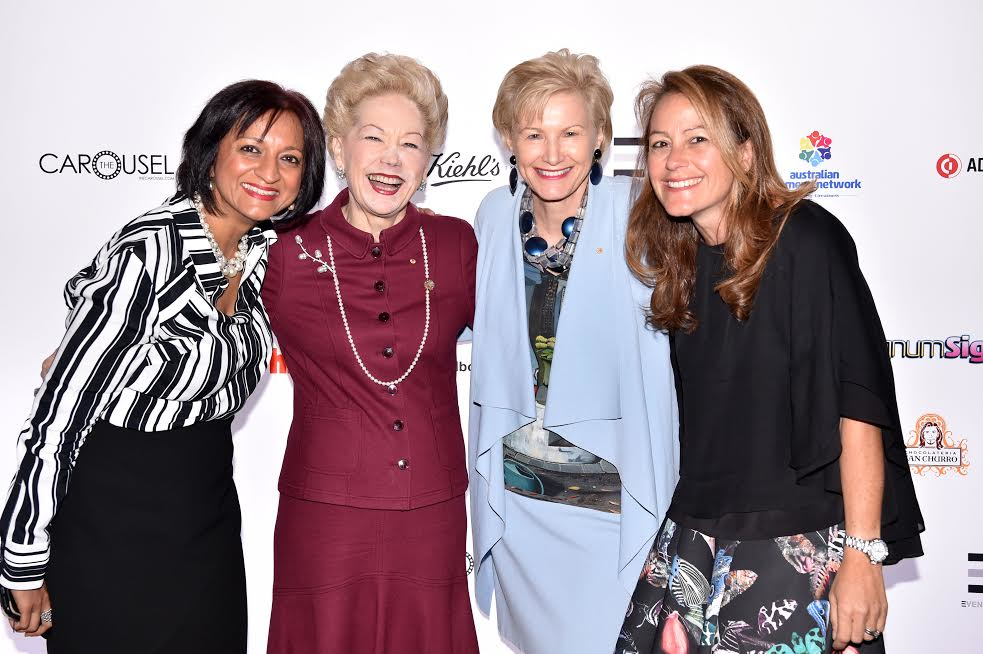 “I wanted people to walk away feeling so inspired with knowing that they’re now part of a family,” AWN founder Francesca Thorne told SmartCompany.

The event saw close to 500 women in business fill the Pullman Hotel at 7am on a Saturday morning.

While there is no such thing as a “secret” to success, one of the best things we can do is be unapologetically authentic, Liano told SmartCompany.

“The magic formula to success, no one can actually pinpoint because if you could everyone would emulate it,” Liano says.

“The universe has been very kind to me because I’ve been allowed to be myself and it hasn’t compromised by brands.”

The biggest highlights of the day were the ordinary women doing extraordinary things for their businesses, communities and families.

“We can do amazing things when we work together,” says Thorne.

With plans to grow her AWN family to 1 million by the end of the year, the team will soon be launching a revamped platform for Australian women to connect with gurus in their industries and help each other grow.

“We’re giving them a platform to be change agents in their own fields and make the biggest amount of impact in their own roles,” Event Negotiators chief executive Adriana Brusi told SmartCompany.

The team’s ultimate focus is on inspiring greatness and making this the “decade of the women”.

Working together with Caleb Yorke, Brusi and Thorne are also planning their next business summit in October but this time it will be all for men.

“My theory is to educate people on why they need women on executive levels and how that helps their businesses,” says Thorne.

“We need to get them to collaborate.”

Speaking at the event, Best & Less chief executive Holly Kramer reflected on a colourful rise to the top, revealing she nearly got into the CIA at one point in her career.

Now leading one of Australia largest retail groups, Kramer says she makes an active effort to improve diversity at the board level.

“My mother was fighting in the 70s for these issues so why are they here now?” she said at the event.

Kramer believes her career went through four chapters before she truly accepted and realised she had to address the diversity problem in business.

“First, I was oblivious, then I was in denial and then I started to realise there was an issue,” she says.

In her first boardroom meetings, Kramer says she felt like the little kid among adults. Men wouldn’t even look at her, she says.

After fiercely staring in vain at male peers presenting at boardroom meetings to get some eye contact, she asked a male colleague a question.

“When you present to the board and there are women directors, do you look at them?” she asked.

The question made him aware of his unconscious bias and ever since, Kramer says, he has made a deliberate effort to be more inclusive in boardroom meetings.

Kramer believes networks, biases, subtle differences and confidence are some of the many quiet challenges faced by women at the top or those trying to get there.

To overcome these, she says making an active effort to network, go above and beyond and choose priorities well are critical.

“You actually have to work hard, whether that’s because you’re a woman or there’s a lot of competition,” she says.

On top of these, she encourages women to self-promote.

“You have to back yourself,” she says.

At the board level, Kramer wants executives to become aware of their biases and start sponsoring people who are different.

“Should the next candidate look exactly like the last candidate?” she says.

“As a director, I’m certainly working to bring women on boards.”

Climbing the ladder through grief and hardship

After growing up in public housing and cheerleading on the sidelines of local football games, Dr Susan Alberti went on to found the DANSU property group and kicked her way into AFL boardrooms.

“The other thing that I’m certainly proud of is women in AFL football and the recognition they’re getting and deserve,” Alberti tells SmartCompany.

As an advocate for women’s AFL, Alberti says the 96% increase in women playing Aussie Rules in 2015 strongly signifies this market can no longer be ignored.

But her journey has not been easy.

After the passing of her first husband, Alberti went through the harrowing experience of losing her daughter to Type 1 diabetes during a flight from the US to Australia.

As she held her daughter in her arms for the rest of the flight, she made a vow.

“I decided I was never going to stop what I started,” she says.

Around this time, Alberti also had to make one of the scariest decisions of life balancing personal grief with the decision to be one of the first women to get a builder’s licence.

She decided to get one, which sparked a career that would last another 15 years.

“Many times, I’ve had to stand up for myself because it has been a male-dominated industry but I’m not afraid of speaking about the things I believe in,” she says.

Looking back over a successful career, Alberti says it’s critical to just get on with the job, work hard and be a strong woman, even when it makes others uncomfortable.

“Whether it’s making the coffee out in the back room or making very big decisions on what sort of business to get into next, I’ve worked hard and I’ve done the best I could possibly do,” she says.