Meet the entrepreneur who built a $1.1 million manufacturing business from his garage 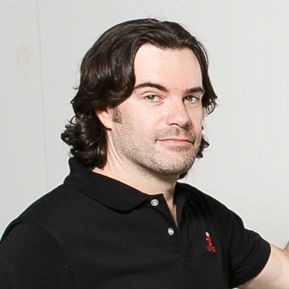 Canberra-based Red Robot is the largest commercial photo booth manufacturer in Australia. But the portable booth design, manufacturing and supply company had humble beginnings – it all started in a garage.

Red Robot was founded in 2011 by Phil Preston and Duncan Amos and to date, the company has helped more than 300 people start their own photo booth businesses.

The company has also won awards, taking home the Telstra Business Award for the Australian Capital Territory in July this year. In the past financial year, Red Robot recorded an annual turnover of $1.1 million.

Preston says it was Amos who first came up with the idea for a portable photo booth business after seeing one at an event and realising there was a market for it.

“It was the first time he had seen an old school photo booth reinvented for the digital age, he saw an opportunity for disruption and to do it better,” he says.

The pair, who previously worked together at the audio visual company Amos was a general manager of, set about building their first booth in Amos’s garage in late 2007.

Preston recalls the first time they tested the booth at a wedding fair and says “people were literally throwing money at us”.

But like many new products, there were a few issues with the first design and the pair embarked on designing a booth that could be set up easily by one person.

“We worked out early on it is the efficiency of your equipment which affects your profitably at the end of the day,” Preston says.

The booths went through 10 different design phases before the product was ready to sell commercially in 2011. That was when Red Robot was born.

“We decided to turn the product into something others who wanted to get into it (the photo booth rental business) could use,” Preston says.

“It was something a lot of people wanted and so we became a manufacturer.”

Preston says Red Robot was the first business to start manufacturing booths at a commercial level in Australia.

Previously there had been a “real mix” to the market, which Preston says consisted of bulk imports from big overseas manufacturers on one end and small scale producers with standard materials and products requiring lengthy set up times on the other.

“Our product is a good mix of both, right in the middle between the two; it’s quick, efficient and very portable and also high quality, made to last,” he says.

But treading a new path in a relatively new market comes with challenges.

“Our biggest challenges have been building skills that generally don’t exist in the marketplace and getting our processes right,” Preston says.

“What we embarked on was something that had never been done before.

“There was no blueprint so we had to forge new and creative solutions to old and new problems to survive.”

Preston says he and Amos overcame this by learning an “amazing amount” of new skills and finding and training up new people to fill in the blanks.

There were other early challenges too, Preston says, including cash flow problems and even finding the right location.

“We started our manufacturing company in Canberra, which is quite an odd thing to do really,” he says.

“But it’s also one of the biggest advantages we had. It’s a public service town, not a place you think of when you think of a startup business.”

Preston cites a lot of help from the ACT government in terms of grants to get Red Robot off the ground, and also easy access to a good network of support as key to overcoming such challenges.

While the lives of many entrepreneurs change from day-to-day, Preston relishes the fact that his mornings usually start in the same way – especially with a toddler who acts as a wake-up call every day.

“The flavour of my life at home is routine. It’s the same thing every morning,” he says, adding this has a positive impact on the rest of his day.

“Pre-children I had a lot of time, but I didn’t appreciate the time I had. I used to stay up until late to get work done… (but routine) forces you to be more efficient with the time you have.”

The rest of Preston’s mornings are generally spent answering emails, doing research and reading, or various activities to keep up his fitness.

But once in the office, Preston’s working life does vary significantly each day.

Preston, who comes from a long sales background, says day-to-day he tends to spend a lot of time “doing customer facing things”.

“Sales is what I know and I’m very specific about how it’s done,” he says.

For Preston, sales and marketing at Red Robot are two parts of the same whole.

After morning meetings and emails, Preston dedicates his afternoon to working on new strategies, new products or marketing strategies around the growth of business.

Red Robot has a staff of eight at the moment, Preston says, and motivating them is about always coming back to the core values of the business.

“Our work is always very value-driven, we attach a lot of meaning to it and value to it,” he says.

“Even for our production guys tightening bolts, when we attach value to the fact it helps our customers be successful in their businesses, the task can take on greater weight.”

Fostering team culture is another important part of daily life at Red Robot.

“We do like to spend a lot of time with the team,” Preston says.

“We buy lunch for them, a company-wide lunch, most days. It’s something we enjoy and it’s a reward thing.”

While Preston looks after the sales and marketing aspect of the business, including strategy and a lot of software development, Amos looks after production, design and management.

Red Robot also recently took on a third director, Peter Walsh, as a business manager about two years ago.

Preston says his relationship with Amos, who has had a number of different businesses in the past, had experienced lots of ups and downs and disagreements, like most business partnerships.

“We’re almost like brothers these days, we know each other’s personalities and ebbs and flows,” he says.

“We share a weird bond, it’s part of the strength between us.”

Preston spends much of his downtime reading books, but his business is never far from his mind, with his choice of reading material usually marketing books.

He also considers cycling “a form of meditation” and spending time with family as an important leisure activity.

Preston says most members of his team also have families and family values are important.

“Family time always important for us and our team,” he says.

“We aim to get staff out of here at a reasonable time.”

He says becoming a parent and a managing the demands of a growing business at the same time was a bit like having two children: “it’s competition for attention”.

“Working on work/life balance for me is about having a shut-off time,” he says.

“Generally, before you have children, when you go home as an entrepreneur there’s no shut-off time. Now it’s different – I’m coming into realisation it’s important to have a clear and distinct shut-off times.”

Preston says the next big thing for Red Robot will involve expanding its exports and establishing people on the ground in international markets.

“This year and next year we expect large growth with plans to export more to the US and UK in the near future,” he says.

The company has already had some exposure in the UK in particular, having been commissioned by the BBC to make a custom-built, Dr Who-themed “Tardis” photo booth.

“They’d done something similar in the UK, they came to us and a few other providers and we had the proper understanding, the brief and mechanisms and knew what they wanted to achieve,” Preston says.

“It is a very big brand, I think that one paved the way for a lot of the brands in Australia to sit up and take notice.”

Preston says the business is also focused on creating new products designed according to its goals of helping Red Robot customers become the businesses they want to be.

“New products are designed to do this, to make new revenue streams for customesr and to make their lives easier,” he says.

On the corporate side of things, Preston says Red Robot also has plans to start monetising some of the photo sharing expertise it had acquired.

“We’ve become experts in photo sharing, so it’s looking at a way of turning photo sharing into something tangible,” he says.

“It allows the customer to generate branded content and share it – that becomes a word of mouth recommendation, or shared between social networks.

“A lot of brands and brand managers are waking up to value we can bring.”