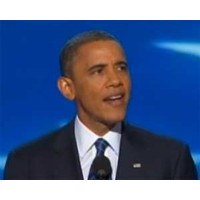 In his oration, Obama outlined the victories of his first term, and took aim at many of the criticisms others have made of it.

It wasn’t the best speech he ever gave. It was less rousing than his ‘Yes we can’ acceptance speech in 2008. Heavy on practical examples of his leadership, it was aimed at addressing his critics as well as inspiring the country, creating a slightly defensive note towards the start.

Nonetheless, Obama on a bad day is still one of the world’s most powerful orators.

This isn’t just about position. Being president, like being the CEO, by its very nature imbues authority.

Obama’s speeches were breathtakingly good long before he had the authority of the presidency behind him.

We can break why he’s so good into three broad elements: how he looks, how he sounds, and what he says.

Obama has perfect posture, which he uses to great effect in his speeches. His head is held high, revealing his strong jaw and steady gaze.

His stance is grounded. He uses his hands sparingly, but when he does, it’s for sharp, pointed motions.

He is young, trim, professional and tall. He looks light, nimble and flexible and alert. His clothes are tailored but they are everyday workwear of the professional man: the suit.

Standing beside him is his beautiful wife, with her no-nonsense intelligence, reaffirming the idea that choosing Obama is an intelligent move. She complements his presentation with her own simple but elegant and fresh dress-sense. She, and their children, make Obama the whole package.

He also benefits from a deep voice. It’s deeper than that of his former rival, 2008 presidential nominee John McCain, but only slightly deeper than new opponent Mitt Romney’s.

In a study published this year, American researchers changed the depth of voice recordings, before playing them to subjects, asking them who they were more likely to vote for. Their subjects chose the deeper recordings much more often.

Going by this theory, we should expect a closer election than last time.

Obama makes frequent use of stories. His examples aren’t numbers: they’re people. For example, in today’s speech, when talking about the values he represents, Obama painted a vivid and highly personal picture: “… The values my grandfather defended as a soldier in Patton’s Army; the values that drove my grandmother to work on a bomber assembly line while he was gone,“ he said.

Linguists have long pointed out that Obama’s speeches, like those of civil rights leader Martin Luther King, have a certain musical quality. Short simple lines, motifs often immediately repeated, leading to a tempo that guides and quickens people’s emotions.

‘Yes we can’ had that lyrical quality, as did his closing lines during today’s speech: “Yes, our path is harder – but it leads to a better place. Yes our road is longer – but we travel it together. We don’t turn back. We leave no one behind. We pull each other up.“

But finally, what draws all this together is Obama’s relaxation on stage. He doesn’t overdo ‘inspirational’ and ‘powerful’. He has variety. He tells a good joke. He doesn’t look forced.

Most impressively, Obama makes sophisticated, no doubt heavily-crafted oratory look natural. On stage, most of the time, Obama just looks like himself.