How to represent your brand better than Rudd and Abbott 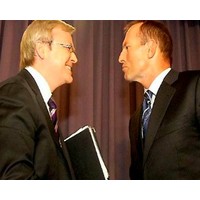 When Julia Gillard was ousted as prime minister by the Labor Party in favour of a resurrected Kevin Rudd, the race to the ballot box became largely focused on the two leaders, at the expense of policies.

JoElla Marketing director Megan Barrow says the 2013 election became a “presidential campaign”, with much of the public basing their views on the actions of the two men.

“Rudd was good in 2007, but this time his campaign was about him saving the Labor Party with his popularity,” she says.

“Abbott had a controlled campaign, but I don’t think we know who the real man is.

“This is an issue with politics, with everything being so highly scripted and on message.”

The key is that the leaders were serving as the face of their brands, and for business owners, there are lessons to be gained about being the key representative of a company.

Barrow says to be a successful ambassador for your business, it is important to stay true to why you started the business and your sense of purpose for it.

“If you are being true to your authentic self, the business should be aligned to who you are as a person,” she says.

Barrow says people like to hear real-life stories so they can relate to the journey of the business and the passion behind it. She also encourages the leader to “normalise” the business to make it accessible.

“Get rid of the jargon and all the industry talk,” she says.

“This [jargon] is fantastic if you want to sound intelligent to your competitors, but there is no use sounding intelligent if the messages are not relating well with your consumers.

“Make sure your online profile has a backstory alongside your business message, and relate all of your social media and blog posts in some way back to your business.”

For example, when Tony Abbott declared colleague Fiona Scott had “sex appeal”, criticism of his actions fuelled the Coalition’s campaign for days.

Heinemann says the gaffe serves as a reminder about the negatives of having a spokesperson or face of the business, but says the trick is to act immediately.

“Own up and acknowledge the mistake, and state what you are going to do to get back on track,” she says.

“Don’t hide from the problem, and reinstate what the business stands for.”

Heinemann says it is not just in public, but online, in marketing, customer interaction and business correspondence that the image of the business must be coherent.

“All of these elements have a cumulative effect on the brand and how it’s viewed by people,” she says.

Heinemann says it is important for the face of a business to be level-headed, be able to think under pressure and handle criticism well.

“It’s a choice that could mean the difference between getting ahead of their competition or not.”