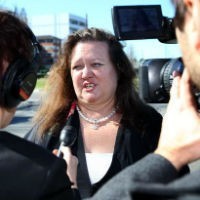 The mining magnate topped this year’s list with a yearly turnover of $2.63 billion but has complained about the use of the word “heiress” in her profile on the list.

In an email to SmartCompany, Jay Newby, Rinehart’s spokesperson and chief financial officer at Hancock Prospecting, claimed the list contained a “significant error”.

“The article described Mrs Gina Rinehart as an ‘heiress’.  This is wholly incorrect.  Mrs Rinehart is not an heiress,” Newby says.

“How can anyone be an heiress if the relative left a bankrupt estate, as was the position with Mr Hancock’s estate?”

Newby says when Rinehart assumed the chairmanship of Hancock Prospecting upon the death of her father, Lang Hancock, in 1992, the company was “in a parlous financial state”.

He says Hancock Prospecting had “significant debts” and other liabilities together with “significant legal claims against it”.

Newby says Hancock Prospecting’s assets were mortgaged or under legal threat, and an associated entity, the Hancock Family Memorial Foundation, was insolvent.

“Over the next 20 years Mrs Rinehart built the company group into Australia’s largest and most successful private company group through hard work, great effort, long hours and dedication, with the assistance of only a very small executive team,” he says.

SmartCompany responded to Newby saying it will not change its description of Rinehart as an heiress given she inherited Hancock Prospecting and Hancock’s Rio Tinto royalties.

The New Yorker values Hancock Prospecting at $75 million at the time of Hancock’s death and Rio Tinto royalties at approximately $12 million a year.

Both these assets have grown significantly in value due to increase production and higher iron ore prices.

Indeed, Rinehart is excluded from some lists of female entrepreneurs as a result of her inheritance, with BRW omitting Rinehart from its annual Rich Women List.

Some SmartCompany readers also complained about Rinehart’s inclusion on the list.

“Comparing Gina to @CarolynCreswell does a disservice to a true entrepreneur like Carolyn. Hancock well established before Gina,” SmartCompany reader Mark Tobin says on Twitter.

@SmartCompany Comparing Gina to @CarolynCreswell does a disservice to a true entrepreneur like Carolyn. Hancock well established before Gina

But SmartCompany stands by its inclusion of Rinehart in the Top 30 Female Entrepreneurs list.

“Rinehart’s inclusion on SmartCompany’s list of top female entrepreneurs is testament to what Rinehart has done with this inheritance by building her business far beyond her inheritance including the creation of the Roy Hill Mine,” SmartCompany said in its email to Newby.