Is Kevin Rudd a ‘corporate psychopath’? 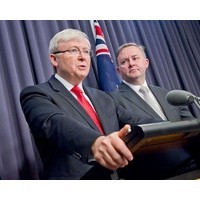 In a recent article in The Australian (August 21), Janet Albrechtsen suggested that Prime Minister Kevin Rudd may be a corporate psychopath.

She ticked off various boxes:

Since then, a number of commentators have picked up on this theme and it is almost becoming a meme. The first person to publicly call Rudd a psychopath was Labor MP Steve Gibbons in 2010. If actions speak louder than words then the deposing of Rudd as PM in 2010, and the number of Labor stalwarts who refuse to be in a cabinet with Rudd or leaving politics, indicate a serious personality flaw.

As readers of my blogs will know, I am a great fan of the Humm-Wadsworth model of seven core emotional drives. One of the great strengths of the Humm model is that it helps you recognised the ‘corporate psychopath’, a person with a strong ‘hustler’ component and a weak ‘normal’ component.

Hustlers divide the world into winners and losers, consider themselves ‘winners’ and treat the ‘losers’ as dirt. When this occasionally backfires, they concoct excuses. Hustlers listen to only one radio station WIIFM: What’s In It For Me? They will sacrifice the long term (particularly that of other people) for the short term gain of themselves.

Normals are conservative, logical and unemotional in their approach and decision-making.  They are driven by the desire for order and their first question in life is who else is doing this? They carefully weigh the benefits and costs of any decision and this makes them excellent strategic decision-makers. A core value to a high normal is that the needs of the group or organisation come first.

When looking at leaders, a strong hustler is not bad. It makes them charming and flexible.  Governing is often a compromise and requires diplomacy. Good hustlers have the art of getting what they want from someone who doesn’t want to give it to them, and having them thank you afterwards.

You can think of a number of politicians who have a lot of hustler: Hawke, Keating, Clinton, and my favourite, Graham Richardson. But they all had a high degree of normal.

What is very dangerous in a leader is if the normal is low and the hustler is high.  Unfortunately, the evidence is building that this is Rudd’s temperament. Each day we are seeing yet another grandiose gesture.

The one rule that you must never forget with corporate psychopaths is that you can never trust them. Everything must be in writing and you have to watch everything they do with an eagle eye.

The irony in this election is that Rudd defined the core issue as who do you trust? Him or Abbott? Only a corporate psychopath would ask such a question and take such a gamble.