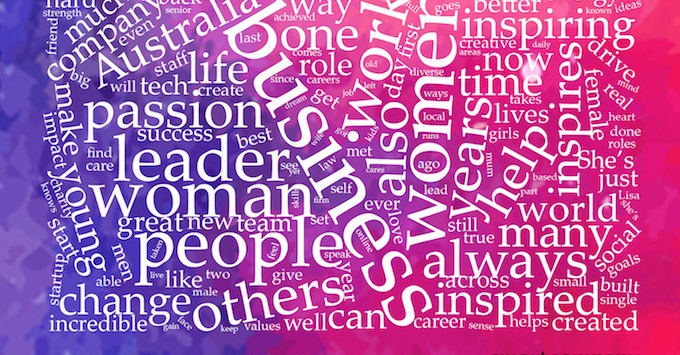 When you think of the women who inspire you, what words come to mind?

As part of SmartCompany’s International Women’s Day coverage, we asked our readers and members of the business community to nominate women who have inspired, challenged and supported them in their careers.

We received more than 500 nominations and these women now all feature in our IWD 2018 showcase. But we’ve also analysed all the language used by those who sent through the nominations, some of which went well over our limit of 140 characters.

What emerged is snapshot of the types of words used to describe inspiring women in business. The most commonly used words were ‘business’, ‘women, ‘people’ and ‘woman’, in that order, which is unsurprising.

Looking further down the list of commonly used words, some interesting trends are clear.

Many of these women were nominated for the way they treat others; they are constantly thinking of those around them and what they can do to help those people and their wider communities. The word ‘others’ was used 58 times, the word ‘help’ appeared 53 times, ‘helping’ was there 26 times, and the word ‘community’ was counted 45 times.

The impact these women are having is clearly wide-reaching. ‘Australia’ was mentioned 49 times, ‘industry featured 47 times, and ‘world’ was used 42 times. Meanwhile, the word ‘change’ was used 46 times.

NOW READ: Here are the women who inspire Australian businesses and startups