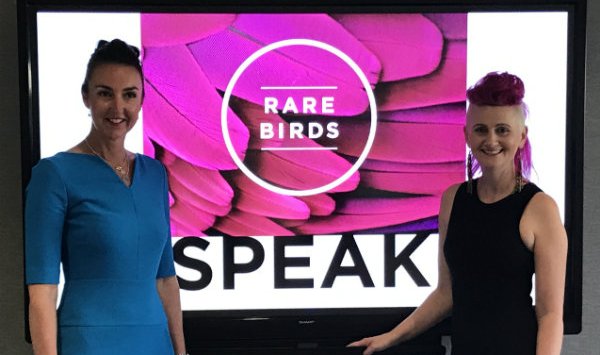 It is hard to believe but September 21, 2017 is the day the world’s first full-service women’s-only talent agency opened its doors, with Australian women at history’s helm.

Big ass launch today! Stand by and all will be revealed. @rarebirdshq

The organisation’s mission is to “create gender balance on stages and pages all over the world” and both Burston and Perry are hopeful that the agency will render All Male Panels a relic from the past.

“I’ve been on the professional speaking circuit for more than a decade and I am often the only female speaker at events,” Perry says.

“Without female talent the audience is only getting half the story. It is time for audiences to get the full story.”

Burston says the panel pledge, signed by Male Champions of Change who agreed not to speak at events without gender balance, planted the seed for this business.

“The panel pledge highlighted a serious problem and brings some major corporates to the table and Rare Bids Speak is delivering the commercial solution. We’re giving these incredibly talented women a way to be more visible and industry a way to access the best female talent.”

As it stands 15% of panelists and keynote speakers in Australia are female, less than 21% of experts quoted in the media are women and in the business press this drops of 12%.

Speaking at the launch in Sydney on Thursday Perry quoted the former federal sex discrimination commissioner, Liz Broderick, who said “If you don’t intentionally include women, the system unintentionally excludes.”

“Excuses like “there aren’t any women in this field’ just don’t cut it anymore,” Perry says.

The reality is there are bucket loads of talented, fascinating female speakers and the demand for their stories is growing.

We’re unearthing emerging talent from sport, science, business, start-ups as well as signing on award-winning international speakers. Their stories are gobsmacking and they aren’t yet being placed on centre stage but we’re about to change that.”

The importance of another thorny issue for female speakers – being paid appropriately – was made clear when an attendant at the launch recounted an eye-opening experience.

Earlier this year she was asked to speak at an international summit in Copenhagen, an invitation she was honoured to receive. While there she was chatting to a male friend who asked what fee she had secured for the appearance. When she said nothing, his jaw dropped, he said he was being paid $15K and said she needed to get with the program.

Here’s to more women on stages and pages everywhere … and being paid the way their male peers are.

What’s hard to believe is that we are seeing “womens only” this and “womens only” that, and it isn’t considered discrimination! The whole equality movement has gone off the rails quite frankly – how can womens only of anything be construed as equality – when there is no way we could ever have “mens only”. It just doesn’t add up – and the people pushing this stuff and pretending it does, should have a good long look at themselves.

The author of this article claims to be a “passionate advocate for gender equality”. And then goes on to promote a company that discriminates outright on gender.

The fact that women do not make up 50% of all speakers doesn’t mean they are discriminated against or that the audience is somehow losing out. What is important is that speakers are selected on merit, not on gender or race, etc. And nobody suggests that that isn’t happening.

It would be interesting to see an article by this author on say the gender gap in high school teachers or child custody. Especially if she can find initiatives to redress those balances.

This is the very definition of discrimination and sexism.

There seems to be some sort of new movement where discrimination is now justified on the basis of promoting gender equality and correcting gender imbalances. Perhaps this is the “positive discrimination” and “affirmative action” that we can keep hearing about?

The result of this will be a silent push back against the proponents of these types of movements. In effect, these types of organisations will actually achieve the reverse and make it much more difficult for legitimate women to succeed in business.

The focus needs to be on people that achieve via merit. Not racial or gender quotas.