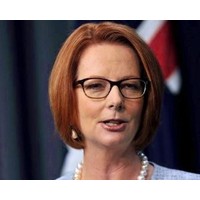 Julia Gillard is seriously tough. Whatever you think about her politics and three years as prime minister, you can’t deny she’s put up a continued fight against difficult circumstances, and deserved Wayne Swan’s praise as one of “the toughest warriors” the Labor party has ever known.

Gillard’s retained her resilience not only against a relentlessly negative Opposition leader, but also within a difficult minority government, surrounded by an oftentimes hostile media, and up against uncontrollable forces within her own party.

Her manner walking into last night’s caucus vote — in which she must have known she’d already lost her party’s support given one of her strongest advocates Bill Shorten announced he’d switched his allegiance to Kevin Rudd — was one of confidence. She smiled going in and smiled (just a little less) coming back out again.

She kept her dignity, nerve and pride in her own achievements while later fronting the media to congratulate Kevin Rudd on winning the leadership ballot. She did that, despite having just lost her job, the public backing of her allies and a no doubt a few friends. She didn’t shed a tear.

Indeed, Gillard’s portrayed an ability to stand tall and determined throughout her entire prime ministership that most of us can hardly imagine ever being able to personally achieve.

Writing on this previously, I had people tell me her confidence was deluded, perhaps bordering on a personality disorder. This was especially around the time she declared “we will win” to Toby Abbott, during Question Time, despite the polls indicating a Labor party wipeout.

But is expressing a belief you can achieve something against all the odds such a terrible thing?

She did, after all, retain such confidence despite some disturbing abuse. Let’s not forget she had commentators declare her father had ‘died of shame’, faced ridiculous speculation that her partner is gay, and had her body parts continually mocked in public forums. She faced repeated calls for her resignation from the Opposition and her own party. Should she have simply accepted it?

But all that is just a side note compared to the tenacity she had for pushing reform despite a bitter and difficult parliament: education, disability care, and a price on carbon. She attended 24 funerals of Australian ADF members killed overseas. Her misogyny speech was so brilliant it went viral across the world and will continue to be referenced by women who know the realities of sexism at work. It was the first moment she dared to play the so-called ‘gender card’.

Interestingly, it’s this speech that the rest of the world seems determined to remember Gillard’s leadership by. International headlines today carry lines like “Julia Gillard, hailed for ‘misogyny speech, dumped as Australia’s first PM’. As Gillard noted last night, Australia’s reaction to its first female PM does not explain everything about her tenure, nor does it explain nothing at all. “It explains some things. And it is for the nation to think in a sophisticated way about those shades of grey.”

Gillard showed women can compete in combative and adversarial environments. Like or dislike her, she’s smashed every stereotype we’ve come to expect from women in leadership.

The next time you’re having a difficult day at work, find yourself in a hostile meeting or up against a difficult colleague, just think how Julia Gillard survived it for three very long years.

And while Gillard was finally brought down, she managed to establish a significant reform agenda that will ultimately become the legacy she’s remembered for.