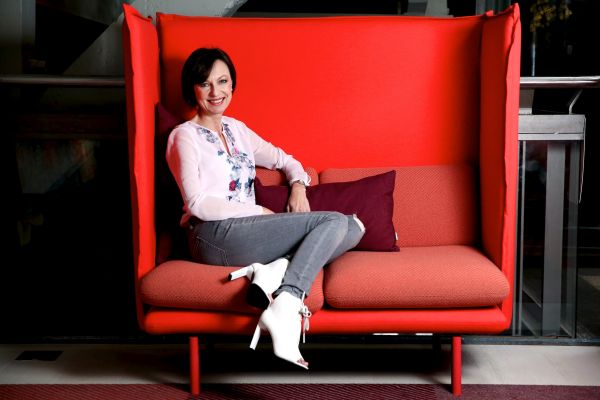 If you need further proof that tenacity gets you to the top, consider this: Karen Lawson’s just been appointed chief executive of Slingshot, a role that didn’t exist until she picked up the phone to the incubator’s two co-founders and said she wanted to run the business.

Having been with the accelerator connecting startups with corporates for just five months as their Head of Innovation, Lawson found she was seriously passionate about the business – but still had that burning desire to lead a business.

She’d previously served as chief executive of CareerOne, where she led a major transformation, and in senior executive positions with Yahoo. And while she’d had a number of great job offers on the table over the past few months, a passion for working with startups left her reconsidering her options.

It took a conversation with a mentor – or one of her ‘personal board of directors’ as she likes to refer to her mentors – to realise exactly what she wanted to do.

“Forty-five minutes into that conversation I was still talking about Slingshot,” she says.

“So she [the mentor] said to me, ‘Karen, what are you doing, this is the company you’re working for. This is your job, go and make it happen’.”

And so Lawson picked up the phone and told the founders Trent Bagnall and Craig Lambert she was specifically looking for a chief executive role. If they could make it happen, she’d love to be it.

“It’s a difficult conversation to have when it hasn’t been brought up before, and when you’re telling two founders you want to run what’s always been their business. You want to do it in a way that’s completely respectable, with the right meaning and purpose.”

They said yes – they’d been considering it already. Lawson was officially named chief executive on Monday afternoon, and will lead the next stage of the accelerator’s growth.

Lawson says it’s the company’s unique position in connecting entrepreneurs with corporates that fascinated her. She believes such connections enable a start-up to flourish, and a corporate to avoid being ‘disrupted’ – ultimately helping to create more jobs and more opportunities.

“I was just blown away by this business,” she says.

“It was the challenge of being able to work with two markets that typically don’t work with each other. Often these are two worlds that are trying to kill each other. But when you think about it, each others’ strengths are the others’ weaknesses.”

She’s spent much of her leadership career in large organisations that have had an ‘entrepreneurial’ flavour, like Yahoo and CareerOne, and says the experience has given her a great respect for founders.

“Entrepreneurs put their lives on the line. It’s their children’s future. Their homes,” she says.

“Then you have corporates that just can’t innovate fast enough … If you can get these two forces to work together, that’s powerful. And to do it at scale is incredible … I’ve always believed in the idea of saying one plus one equals something magical.”

Slingshot has helped incorporate 33 startups to date, with 27 of them still going strong today. Lawson believes that now having a female leader involved will help encourage more women into the program, although Slingshot has always had a diversity mandate and ensured female leaders are included in every intake.

Lawson’s sits on the advisory board of Seventeenhundred, creating work-life integration and diversity solutions to organisations, as well as job share destination Gemeni3. She also dabbles in food and travel journalism on the side.

She says that throughout her career, she’s always known the importance of “reinvention and innovation” and how it can make and break a business.

“We made my job happen,” she says.

“It’s not a bad thing to go and do. If there isn’t a job, then go and create it. That’s what startups do all the time.”

Karen Lawson does not make her contact details as CEO of Slingshot available to customers. I have been able to find those of other companies such as Vodafone, but not Slingshot. Is she hiding behind the fiasco that one meets when one signs up with Slingshot rues the day that it ever happened?