Leadership isn’t so stressful after all: study 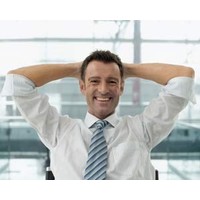 Being in charge might not be as stressful as is often assumed, reveals a new study from researchers at Harvard University.

The study, published in journal PNAS today, found that leaders had lower levels of cortisol and lower reports of anxiety compared with non-leaders, regardless of age, gender and ethnicity.

The researchers, led by Harvard University’s Jennifer Lerber, write that despite the perception that leaders had higher stress levels, if leaders also experienced a heightened sense of control— a psychological factor known to have powerful stress-buffering effects – leadership should be associated with reduced stress levels.

“When you talk about job control people think it’s trivial and some scientists think it’s soft science. This helps dispel that, because the stress hormone cortisol follows the pattern and it looks like it may well be explained by control.”

He said that for highly skilled workers, the stress caused by high demands was offset by the high level of control often afforded such workers.

“This isn’t to say that all high-status jobs are fine, they’re not,” Professor LaMontagne said, with the difficulty of job demands playing a role.

“People like to be challenged, but if that’s combined with low control it’s harmful, if it’s combined with high control, and the ability to use a number of different skills, then its health-promoting, as long as the demands are achievable.”

The Harvard University researchers write that other factors, such as social support and active coping, also play a part in buffering against the negative effects of job strain, something they did not investigate in their study.

Higher-status workers not only have a higher status, said Professor LaMontagne, but other benefits afforded by greater material advantage.

“They’ve got other social resources that buffer the effects of a crappy job, such as social support outside of work or other advantages like living in a good neighbourhood.”

But before assuming all leaders are less stressed, it’s important to consider the design of the study.

Tim Driscoll, associate professor in public health at the University of Sydney said the cross-sectional design of the study meant it would be difficult to make a causal link between leadership and stress.

“The problem with it is you don’t know what came first.

“It might be people who are less anxious and less stressed make better leaders. It might be the fact they don’t get stressed or anxious has allowed them to take on a leadership role.”

Professor Driscoll said to better understand the link between leadership and stress it would be necessary to take a group of people who are not in leadership roles and follow them over time, looking at their starting level of cortisol and anxiety and studying how that changes as they do or don’t go into leadership roles.

“The hypothesis was if you have a leadership role where you’ve got more control you’re less likely to be stressed or anxious.

My question is how do you know it’s not the other way around?”