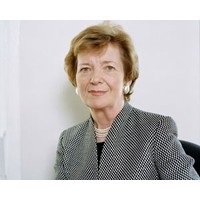 Mary Robinson became the first female president of Ireland in 1990 but refused to be a figurehead like her predecessors. Lacking formal power, she used the “moral authority” of her office to rally public opinion. A former lawyer (who once thought she’d be a nun), she went on to serve as the United Nations high commissioner for human rights and now leads her own foundation.

Q: How does one wield influence in the absence of formal authority?

A: Part of it is to be close to those providing good examples and to talk about their activity. I had to use symbols and the right language and to reach out into the different communities to influence others. Since then, I’ve learned to influence in a different way. I’ve led two small organisations with global ambitions, and to do that, you have to partner well, to find the niche issue that will point to a whole area to be addressed by those with power.

Q: Where did you get the courage to challenge people and institutions more powerful than you?

A: At every stage it was a passion for human rights that prompted me to speak truth to power, to stand up to bullies, to criticise – even the United States after 9/11. People told me it wouldn’t help my career as high commissioner, but it seemed much more important to do the job than to try to keep the job.

A: Obviously, it’s not black and white, but I do think women tend to be problem solvers and lead in a more participatory way. It’s less hierarchical; there’s more listening and nurturing. I used to chair a council of former and current female presidents and prime ministers, and people are always surprised when I tell them how many there are: now more than 40 living women. And yet it hasn’t made the difference that it might have. In business as well as politics, we need to link women who have access to power with women at the grass roots who are coping with human rights abuses so that everyone can do something about it in her sphere of influence.

Q: You famously choked up talking about atrocities in Somalia. How much emotion should leaders show?

A: I’d seen children dying in their parents’ arms, and at that press conference a wave of those images came to me and my voice broke. I was furious, because I’m a trained barrister and should be able to advocate calmly, with assurance. But I realised later that the message was all the more powerful because I was so clearly affected. Still, I really don’t like all the tearing up you see nowadays. It’s not my style.

Q: Which skill has served you best in your career?

A: The stamina to work on something until it comes right. I struggled to build my office at the UN because of the bureaucracy. It wasn’t possible to pick people from a region already represented on the team. So I couldn’t have as my deputy a very good Swedish human rights person because we were both European. Decisions on staffing had to go through New York, so it could take more than a year to fill a post vital to our work. And it was difficult to upgrade good officers to decent contracts. At the same time, I had people who didn’t care about human rights and were doing almost nothing on secure contracts, so I couldn’t fire them. I was tearing my hair out. But I learned to be patient, and after five years the office was stronger. I believe that real, sustainable leadership strengthens the institution, gives it vision and purpose. The Irish presidency will never go back to the exalted, not very busy office it was before I was elected. I reinterpreted the traditional limits that had been put on it.

Alison Beard is a senior editor at Harvard Business Review.