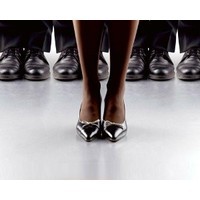 Getting a handful of our most powerful chief executives in the same room at the same time is no small feat. Getting more than 20 of them, including the head of our defence force, and having seven of them voluntarily submit themselves to 7.30 host Leigh Sales’ questioning, is remarkable. But it happened just a few days ago. Even more remarkably the topic that drew them in was the role of men in accelerating the advancement of women in leadership.

The fact the topic of women’s representation in leadership is couched as an issue is worth celebrating in itself. Recognising a problem exists is a small but significant step on any road to change. And that might just be the most powerful hangover from the launch of the Male Champions of Change 2013 report.

It’s a testament to the tremendous tenacity and leadership of the force behind the initiative, sex discrimination commissioner Elizabeth Broderick, that the event drew the crowd it did. As she has said many times, the responsibility for increasing the number of women in senior leadership roles cannot sit on the shoulders of women alone. The Male Champions of Change program, which Broderick established in 2010, provides a practical pathway for that idea. It enlists male leaders to keep this issue on the agenda and to tackle some responsibility for progress.

In their 2011 report the men considered the why of this issue: why are Australian women still so under-represented in management? This year their report looks at how this can be redressed.

“We have all seen the numbers. We have all read the research. We have all voiced our opinion,” ANZ chief executive Mike Smith told the room. “Then and now, the facts speak for themselves. They tell us clearly, that an intervention is required. Today, we are proposing a leadership intervention.”

Smith explained one of his personal epiphanies that reinforced why intervention is required. He described it as the ‘leadership lottery’ that exists in many organisations.