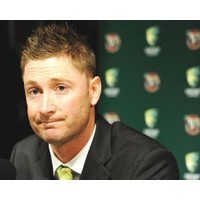 Michael Clarke was recently named the most influential sportsperson in Australia by The Australian. He won the 2012 Alan Border medal (voted for by peers, the media and umpires), and scored more runs in test cricket than anyone else in the game last year. He even got an apology from the Sydney Morning Herald a few months back for their misjudging of him as a player and a captain.

But in the last few days he and the Australian coach, Mickey Arthur, have been heavily criticised by the public, past players and sections of the media for stepping down four players from the test in Mohali for not doing their homework. The rationale given by them was that this incident was the last straw in a string of breaches of team discipline and came on top of two large, embarrassing losses in India. They are well-paid professionals and the management team felt it was time to take a stand.

Remember when being a cricket captain just involved setting a good field and deciding whether to bat first if you won the toss? Welcome to leadership in the 21st century.

Whether we like it or not, sport, and sports teams, look more like businesses than ever before. Probably because that’s what many have become. Cricket is a good example. With multimillion-dollar bids for television rights, players earning exorbitant match fees and sponsors critically assessing ROI (return on investment), cricket is a sizeable business indeed. The question then becomes about how Clarke should lead the Australian cricket team in such an environment.

Taking a corporate model, captain Clarke is equivalent to the CEO and Mickey Arthur could be viewed as chairman of the board. They decide who is in and out of the team, the organisational structure, strategy and tactics. Earlier this week, four members of the organisation didn’t comply with a request from senior management to provide their thoughts on a turnaround strategy, and they were put on ‘special projects’. One declined the offer and has taken indefinite leave.

A consultant brought in to help evaluate performance might look at a lot of things, particularly now that they can access huge amounts of data generated by various performance programs including detailed video analysis.

But the consultants might also ask one very basic question: how did it come to this? It’s not about who did how much homework, being late for a bus, or wearing the wrong uniform. It’s likely to be more fundamental. The problem is really about the culture of the organisation, and any change in performance requires a change in culture.

Leaders talk a lot about culture but culture is often hard to put your finger on. We see the outcomes of culture – behaviours, performance, staff turnover and retention – but culture itself is harder to define.

Management consultants McKinsey & Co are attributed with a broad definition of organisational culture, which is “how we do things around here”. If we believe the reports from India, the way things were done by the Australian team appear to be pretty lax. There would also seem to be a distinct lack of accountability on and off the field.

In simple terms, changing culture requires an organisation to decide where it wants to be and what culture would support getting there, and then collectively deciding change is needed.

Clarke has stated very publicly where he wants the team to be – to return Australia to its position as the number one test team in the world. He has also obviously decided that currently, ‘how things are done around here’ isn’t going to support the achievement of that goal. So he, and the coach, have decided to get tough. Like those in the corporate world, perhaps Clarke’s big leadership test will be his ability to bring everyone in the team along with him.