Microsoft’s most likely: Seven things you need to know about Satya Nadella 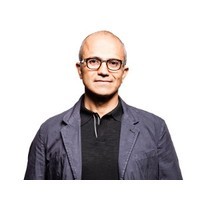 Reports are rife that the person set to replace Steve Ballmer as the chief executive of tech giant Microsoft is Satya Nadella, currently an executive vice president of the group.

Ballmer announced he would leave the top job in mid-2013. Since then the hunt has been on to replace him, with various names thrown in the ring.

If it unfolds, Nadella will be charged with surging Microsoft into the next phase of competition against Apple. He will have to get the tech giant up to speed in the world of smartphones and tablets as it increasingly progresses from its background as a software provider.

Here are seven things to know about Nadella.

Nadella spent his childhood in Hyderabad, India. According to The Telegraph, if he is appointed, he will be the most powerful Indian-born tech executive in the world.

He has spent the bulk of his career at Microsoft, reportedly clocking up over 22 years with the business. His early working days were spent at Sun Microsystems.

3. Brain in the cloud

Nadella is currently the executive vice president of Microsoft’s Cloud and Enterprise group. This role means he is responsible for running the company’s computing platforms, developer tools and cloud services. A key product for Nadella and his team is the Cloud OS back end platform. This powers all of Microsoft’s internet scale cloud services, including O365, Bing, SkyDrive, Xbox Live, Skype and Dynamics.

4. Tricks up his sleeve

Bloomberg reports that his wage for the year to June 30 last year was around $US7.67 million. He is also reported to have shares in Microsoft, making his equity around $20.9 million, according to research firm Equilar Inc, Bloomberg reports.

Bloomberg reports the 46-year old got an Xbox One game console for Christmas 2013 and he has a Nokia Ovi phone with a 41 megapixel camera. According to Bloomberg, at a recent technology conference in Paris, he also had his eye on start-up businesses, including video-on-demand company Video Futur Entertainment Group SA.