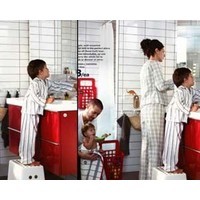 The removal of women from an IKEA catalogue for Saudi Arabia was skilfully done. Altered images showed no sign of females ever being in any portraits.

Unfortunately for the Swedish furniture company, similar attention to detail wasn’t paid to the consequences of publishing such an edited product, or making it freely available online. The company quickly apologised after the women-free catalogue was discovered by Swedish press this month, and went viral over social media.

“We should have reacted and realised that excluding women from the Saudi Arabian version of the catalogue is in conflict with the IKEA Group values,” the company stated, explaining that the edits were made by its local partner in Saudi Arabia. That didn’t blunt criticism; the most damning observation came from IKEA’s native country. “You can’t remove or airbrush women from reality,” said Sweden’s trade minister, Ewa Björling, when asked by reporters about the move.

Wharton ethics and law experts say that in an effort to try and avoid the ire of Saudi censors, IKEA missed the bigger picture of how such a move would be perceived elsewhere in the world. Steps taken to clearly state company values and consult local culture could have avoided the reputational blow it received.

“Perhaps the company’s most striking failure wasn’t its lack of moral courage, but its stupidity in having fallen into the tangle in the first place,” says Tom Donaldson, director of the Zicklin Center for Research in Business Ethics at Wharton. “The mores in the Saudi state are notoriously conservative, as IKEA must know. Armed with deeper cultural knowledge and better foresight, IKEA could have either put the pictures of women into the catalogue and readied a strong defence, or designed a different catalogue.”

International companies have found the Middle East a tricky region to market products and services. Partly because the region varies so widely in social attitudes and religiosity: for instance, while Saudi Arabia adheres to its strict interpretation of Islam, neighbouring United Arab Emirates (UAE) features mixed public beaches and a plethora of nightclubs where alcohol is served.

Another complication is the interwoven nature of religion within Arabic culture. Some companies have resorted in Saudi Arabia to blurring images of any person in their public advertisements, because of the restriction of depicting human figures in Islam.

Soft drink companies, for instance, have taken criticism from a variety of interests for their Middle East products. Coca Cola has long been the target of several smear campaigns in the region – one being that its logo is designed to imply an anti-Islamic message. Pepsi, on the other hand, has been attacked by Western critics for propagating Islam because it produced cans for the region with holiday greetings and crescent images to mark the celebration of Eid.

The region also maintains an active approach to censorship, particularly focused on gender and relations. R-rated films are routinely shortened due to the removal of nudity and depictions of sexual situations, and internet filtering is so tight that even dating and relationship advice websites fall under content bans. Even though the UAE is far more permissive than Saudi Arabia, it too employs an army of black marker-toting censors that ink out any exposed flesh from international magazines; even a November 2011 cover of The Economist was blotted out, because it featured a classical painting with nude statues and figures.

“Some people may claim that IKEA should not be criticised, because it was only seeking to respect Saudi Arabia’s strict social mores. Or, they propose that IKEA was following a rational business strategy, customising products being sent to a foreign country where it knew that moral and cultural values were not the same as in Western societies – and certainly not like those in Sweden.

“But, there is another way of looking at IKEA’s decision to make its catalogue palatable for a group of Saudi censors – that it failed to take into account how it would look when exposed as taking active measures to collaborate with a regime notorious for its policy of gender apartheid.”

Mayer says one thing that IKEA could easily have done was check with a human rights consultant before deciding to scrub photos of women from the catalogue destined for Saudi Arabia.

“Taking into account the human rights implications of international business decisions has become an important step in an era when companies based in democratic countries in the West venture into parts of the world that are not only ‘culturally’ different but have governments that routinely show blatant disregard for protecting the human rights of their citizens,” Mayer says.

“Since the issuance of the 2000 United Nations Global Compact [an initiative for companies to follow standards and best practices globally] transnational corporations are likewise expected to uphold human rights standards. IKEA has been a participant in the Global Compact since 2004. Companies that casually sign up for the Global Compact but do not consult these universally applicable standards before engaging in conduct that would be dubious or blameworthy in their Western home countries can wind up with egg on their faces.

“Just as IKEA has joined the Global Compact, Saudi Arabia has ratified the United Nations Women’s Convention, which outlaws all forms of discrimination against women. In fact, the Kingdom has in international forums gone on the record with statements to the effect that Saudi law and its Islamic values accord women full equality and bar any discrimination against women. That is, it is on the record as accepting the principle of women’s equality as consonant with its law and as reflecting its understanding of Islam.

The better course would have been to send the regular IKEA catalogue with photos intact to Saudi Arabia, she says. “Of course, there would be a good chance that the Saudi censors assigned to review imported magazines would take out their black markers and ink out the offending photos of women. Letting the Saudis decide when and what to censor would have meant that it would be the Kingdom, rather than IKEA getting the flak for ensuring that women stayed invisible.”

Mayer says that IKEA should also have checked their commitments, as its catalogue gaffe undercuts its association with the cause of women’s empowerment.

“IKEA has gone out of its way to advertise its support for the Half the Sky Movement, which collaborates with NGOs in efforts to encourage a wide range of efforts to improve the lot of women in poor countries,” Mayer notes. “Where do things stand now that IKEA has taken an ill-considered step that leaves it open to criticism for becoming an active collaborator in official Saudi strategies to render women invisible and powerless? It has been pushed into damage control mode. It will take a big investment on the part of IKEA to regain the credibility that it has lost.”

Wharton’s Donaldson says that the Swedish company needs to understand that in this instance, it was better to stand up for its principles than attempt to display cultural understanding, since it failed in both in this instance.

“As I’ve argued elsewhere, respect for, and tolerance of, cultural differences is an ethical responsibility, but tolerance ends when a fundamental, universal principle is at stake, especially when one is asked to be complicit in violating that principle,” Donaldson says. “The principle here turns on the equal respect due to humans regardless of gender.”

Though lost in the furore, Donaldson points out, is that IKEA missed a real chance to produce a product that respected cultural sensitivities, and contributed to its public perception of a company based on tolerance.

“This unhappy IKEA event occurred in an historical context where simplistic misunderstandings of Islam, and equally confused misunderstandings of Western ideas, are rife. Moreover these “clash of civilisations” confusions breed enmity and deadly violence. Many Westerners, for example, probably don’t know that mores are changing even in Saudi Arabia. The prevalence of Internet and satellite TV has made religious censorship of media virtually impossible.

“True enough, in Saudi street advertising, even when shown wearing the hijab, women’s faces are sometimes blurred. But had IKEA designed the magazine differently, for example, not showing pictures of women in their pyjamas, they might well have constructively moved the ball of cultural change forward. As it was, they probably moved it back.”