Myer is My Disaster: can anyone save the ailing retail giant? 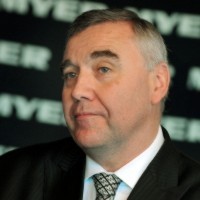 Myer chief Bernie Brookes is a man of many excuses. In his latest outing to justify another poor profit result, he blamed customers skittish about the economy and wary about interest rates going up.

Nonsense. In the eight years since Myer was sold by Coles Myer to private equity outfit TPG Capital, annual sales have remained static. In fact, at roughly $3.1 billion, annual sales are about the same as they were in 2005,when the business reported its last full-year results under Coles Myer, despite a brand-new Myer Melbourne and six additional stores. Taking into account inflation and store growth, in real terms sales have been going backwards at an alarming rate.

Profit has decreased every year since the business was floated by its private equity owners in 2009. The initial boom in profits post takeover was mostly due to aggressive cost reduction, and today there are few opportunities to cut further. This is very worrying for investors who forked out $4.10 per share based on a shiny prospectus laden with images of Jennifer Hawkins that promised to bring magic back to a once grand dame.

Myer probably lost its way in the late 1970s or early 1980s. There have been several strategy reinventions since the merger with Coles in 1985, but that fateful deal was really the start of a long, slow decline into fashion irrelevance.

Relaunch strategies have taken Myer upmarket and downmarket, and it has replaced the department-store staple of cosmetics at prized city store mall entrances with mobile phones and stacks of microwaves. It struggled through the growth of specialty retail and now looks lost and beaten in the face of the online shopping boom. Not even Brookes’ much hyped “omni-channel” approach — whatever that is — seems able to save it.

One thing Myer does well is confuse its customers. On one hand there’s Jennifer Hawkins strutting down the catwalk wearing a high-end designer label that might be available in two or three stores, while the reality of shopping in an average Myer store is less designer and somewhat different. There’s the marquee at Flemington bursting with celebrities and fashion shows featuring big-name international designers, but the reality that most customers see is stores stocked with mid-market brands that are always on sale.

Myer continues to aggressively push private brands, which now account for roughly 20% of total sales. Myer uses them as a lever to drive more profitable sales, promotes them heavily in catalogues and other advertising — often to the detriment of national and international brands that people know and trust — but this approach can add to the perception that the retailer lacks excitement.

Despite all the bad news, in the past eight years there have been many improvements at Myer. There’s a fast and effective supply chain that gets goods from Asia into stores more quickly at lower cost, a new merchandise system, a new point-of-sale system, a new Myer Melbourne and improvements in supplier management. Many of these changes were driven by Brookes and his former chairman Bill Wavish, who left the brand and has since gone on to play a role in the revitalised Dick Smith chain.