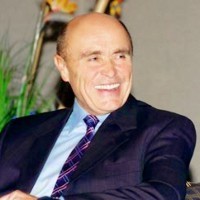 Little, who led Toll Holdings for 26 years, currently holds a 5% stake in Toll Holdings. The sale will mean the Melburnian can expect a payday of at least $300 million.

While Little only found out about the takeover bid from Japan Post on Tuesday evening, he told The Australian the sale is an “emotional” one for him, but he is pleased to see a new home secured for Toll employees.

“It’s quite an emotional sale for me and my thoughts are with the staff. Their future is assured,” Little said.

Little is already one of Australia’s richest businesspeople, with Forbes estimating the 67-year-old’s wealth to be in the vicinity of $820 million as of January this year.

The sale will add another feather to the bow of Little’s career, who nowadays is continuing to make waves with his property business, Little Property Group, and his aviation business, Little Aviation, and as chairman of Essendon Football Club.

SmartCompany has pulled together a list of highlights from the entrepreneur’s career:

Little retired as managing director of Toll in December 2011 after 26 years at the helm. He is credited with leading the management buyout of the company in 1986 and listing Toll on the Australian Securities Exchange in 1993.

But Little’s time at Toll also gave him a reputation as a consummate dealmaker, executing around 100 acquisitions during his time at Toll and building the company’s transport logistics network to 55 countries.

Little previously told SmartCompany companies should make sure an acquisition will make a business “bigger, better, smarter and more efficient” before signing the dotted line.

“An acquisition has to increase activity that lowers operating costs, or it needs to enhance customer service levels,” Little said.

“An acquisition has to do one of those two, or in some cases it needs to do both.”

Little founded his property business Little Property Group in 2005 and today the property development arm of the company alone turns over more than $300 million in sales.

Michael Fox, managing director of Little Projects, previously told SmartCompany the seeds of the Little Property Group were sown while he was working with Little at Toll.

“Our company really started by accident,” Fox said, recalling his time as head of property at Toll.

“I came across a [development] spot in Richmond that I thought I could do something with and I spoke to Paul about it. So it was a combination of my expertise and his bank account.”

At the time, Little Group managed around 3000 rental properties across Australia and Little Residential chief executive Phil Meggs told SmartCompany the acquisition would add around 15,000 additional properties to the network.

Little said at the time he was committed to offering high-quality, well-rounded services in the real estate market.

“As we started to break down some of the barriers and offer not just the opportunity for someone to buy one of our apartments, but then for us to rent it for them, and then one day sell it for them, we’ve found a huge interest in embracing this integrated or seamless approach to real estate,” Little told The Australian.

4. A love of football

Little is a passionate AFL fan and joined the board of the Essendon Football Club in 2011. He has served as chairman of the board since July 2013.

While Little has led the club’s fundraising working group for its new training and administration centre at Tullamarine, his focus has no doubt been on managing the fallout of the performance drug scandal that has plagued the club for the past two years.

Originally established in 2010, PEXA began offering full digital property services in New South Wales last November and expanded to Victoria this month. Moves into Queensland and Western Australia are slated for May, according to Fairfax.

SmartCompany attempted to contact Paul Little this morning but did not receive a response prior to publication.