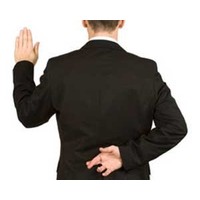 Dana Carney is an assistant professor at the Columbia University Graduate School of Business.

THE FINDING: A sense of power buffers individuals from the stress of lying and increases their ability to deceive others.

THE STUDY: Professor Dana Carney divided research subjects into two groups: bosses and employees. Bosses got larger offices and more power; they were asked, for instance, to assign employees’ salaries. Half of all subjects were instructed by a computer to steal a $100 bill. If they could convince an interviewer they hadn’t taken it, they could keep it. The other subjects were questioned as well. In the interviews, lying bosses displayed fewer involuntary signs of dishonesty and stress. On all measures, liars with power were hard to distinguish from subjects telling the truth.

THE CHALLENGE: Does this mean the most powerful people in the world are adept liars? Carney, defend your research.

CARNEY: We measured subjects on five variables that indicate lying – involuntary shoulder shrugs, accelerated speech, the level of the stress hormone cortisol in their saliva, cognitive impairment and emotional distress. Only the low-power liars could be “seen” as lying; the readings for the liars with power were essentially the same as those for truth tellers on all five variables. People with power lied more easily and effectively, which is troubling. Just as kids don’t touch a stove once they learn it burns them, people don’t like to lie because it hurts them emotionally and physiologically. These data suggest that powerful individuals – CEOs, portfolio managers, politicians, elite athletes – don’t get burned when they touch the figurative stove. They seem to be more physiologically “prepared” to lie, which could lead to their lying more often.

Q: So power begets lying, which begets more power, and so on?

A: It’s hard to tell from this study, where power was a temporary situation. But if someone is constantly in a powerful position, does their lying improve? Does improved lying lead to more power? Those are questions for the next studies. What we’ve shown here is that if you give people power, they’re more comfortable lying, and it will be harder to tell they’re doing it.

Q: It’s hard to believe you can suss out a lie based on shrugs, speech and saliva.

A: The nonverbal cues are extremely reliable to people who are trained to detect them. We set up a high-stakes lie about a transgression. When people commit that kind of lie, they do these involuntary half-shrugs and speak faster. That’s why we ask control questions about the weather, so we know how fast they talk and how much they shrug normally. I’m a trained expert, and I’m about 90 percent accurate in telling when people are lying based on these nonverbal cues. (New York Yankees third baseman) Alex Rodriguez? I could see he was lying. There are lots of other cases where it’s just unbelievably obvious.

Q: But couldn’t these cues just reflect stress? Won’t I show them if I’m at the airport and nervous about flying?

A: No. While cortisol increases under any kind of stress, the nonverbal “tells” of anxiety are different. You’ll see people manipulate objects; they’ll flip the cap on a water bottle or roll a pen. They’ll fidget and do things like stroke their arms. Anxiety is non-goal-directed arousal. It’s just stuff coming out. Liars are trying to suppress something, so the cues are different. Now if you’re anxious and trying not to appear anxious, that will look more like lying.

Q: How accurate are most people at spotting liars?

A: Between 50 percent and 60 percent accurate – barely better than random guessing. It’s unsettling to combine those two facts: Powerful people like CEOs are better liars, and most people are bad at spotting liars.

Q: Still, how much can we tell about CEOs based on a study that used Columbia students as subjects? Does the behavior of your subjects really translate?

A: There are two questions here, a theoretical one and a methodological one. The theoretical one is, What is power? Our position is that it doesn’t matter what your status is, power is a relationship between two actors. You can feel more or less powerful compared with someone else. A CEO being attacked by shareholders can feel perfectly powerless and will probably not lie as well in that situation. Point is, it’s relative to the situation, and it produces the same physiological response. As for the methodological question, our study wasn’t all students. We had a rich, diverse sample with a nice age and ethnicity range.

Q: What other evidence is there that powerful people are scoundrels?

A: We’re doing another study about power and risk. You know how peacocks spread their feathers? What they’re doing is taking up more space, an assertion of power that’s common in animals. Cobras rear; birds spread their wings. Humans do it, too. Think of the CEO with his feet up on the desk, leaning back in his chair, hands clasped behind his head with elbows out. This is not an accident. It’s a biological assertion of power. Conversely, there are subordinate positions – think of a person in a small chair, arms at his sides and legs held together.

So what we did was put some people into power poses and others into subordinate ones. The subjects didn’t even know why they were being put into these positions; they thought we were calibrating some measuring instruments. Then we ran some tests and asked questions. We found that people in power poses show higher testosterone levels and lower cortisol levels. They feel more powerful and less stressed out, just because they take up more space. When prompted, they take more risks than people in subordinate poses.

Q: So when you combine this with the power and lying research _

A: Absolutely! No doubt about it! That guy at the head of the table running your meeting, leaning back in his chair, arms behind his head, he’s going to take risks. He won’t feel as bad about lying to you, and you’re going to have a real hard time telling when he is.