Psst: Your public chatter could hurt your business 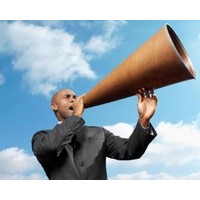 Sometimes you just have to wonder at how dumb some people can be.

I know, not a nice way to start a blog post, but wait till you hear this.

Not long ago I was coming back to Sydney from a week in the Firebrand London office. I stopped over in Bangkok, and had two hours in the Qantas lounge there, doing what all the other business dudes were doing: BlackBerry, laptop, maybe the newspaper.

The seats in the Qantas lounge are fairly close together, and it is impossible NOT to hear what the people sitting behind you are saying, even if you are trying hard not to listen in. And, after a week of difficult conversations in Europe, I had no desire to listen in to anyone. In fact, I had my iPod on for most of the time I was there.

So there I was sending emails and listening to music, when the waiter in the lounge asks me whether I would like a coffee. I take my earphones out to talk to her, and am immediately struck by the loud conversation of two guys, about one metre behind me. They are talking business. No surprise there. But the first phrase I hear is ‘temp margins’. Can I help myself but listen in?

The conversation continues. They are talking loudly. Aggressively even. I could have heard every word if I was 10 seats away, let alone one. And what words they were!

In a few minutes I learn these two are senior executives of a global recruitment company. But there is more. Their business competes directly with mine, Firebrand, in several locations.

A second person is mentioned, by name, and one of the men suggests he needs to be ‘boned’, a callous slang word for ‘fired’. Then things really start to hot up.