Rich Tales: If Clive Palmer becomes prime minister, he could be the richest non-royal head of government in the world 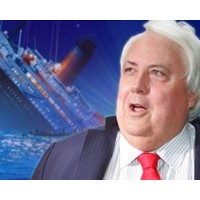 Clive Palmer is one of Australia’s richest people, and he wants to become prime minister.

It’s unlikely the billionaire will succeed. I’ve seen no polling that suggests the leader of the newly formed Palmer’s United Party has a remote chance of surpassing either the Liberal Coalition or the Labor Party come Election Day.

But let’s say he does. If Palmer’s party wins enough seats to make him prime minister, he’ll join a very thin list of billionaires who managed to secure the leadership of their nations.

No Australian prime minister has ever been as wealthy as our current one, Malcolm Turnbull wrote in 2009. That seems a reasonable assertion to me. Rudd’s wealth, which comes from the business of his wife Therese Rein, has been estimated at $210 million. In 2010, Turnbull himself made the Rich List with $186 million, though that was the last time his name appeared.

Australia’s early prime ministers were largely lawyers, career politicians or trade unionists, with relatively few coming from a business background. That’s continued to this day. While our politicians tend to be very comfortably wealthy, they rarely make the rich lists.

If Kennedy wasn’t America’s richest president, then it is likely George Washington was. America’s early presidents tended to be far wealthier than its more recent ones, and Washington’s fortune – $US525 million when adjusted for inflation – came from his Virginia plantation as well as significant property inherited by his wife.

Had Romney been elected, he would have been the third richest American president, if his real fortune is near the upper bounds of his estimated one – $US256 million. But he was beaten by current president Barack Obama, whose fortune is estimated to sit between $US1.6 million and $US7.7 million.

Among former leaders, there are a few more people with billions to their name. Silvio Berlusconi, who was elected to three non-consecutive terms of office in Italy, was worth $US6.2 billion in 2011, according to Forbes, while Wen Jiabao, until recently premier of China, was worth more than $US2 billion, according to The New York Times.

But these exceptions aside, the general trend is that to be fabulously wealthy and be head of your government, you pretty much have to be royalty.

The king of Thailand, Bhumibol Adulyadej, could rival Gina Rinehart in the wealth stakes. In April 2011, Forbes estimated his wealth to sit at $US30 billion. Rinehart was valued at $22 billion by BRW this year.

The next-richest head of state is the sultan of the tiny nation surrounded by Malaysia, the Kingdom of Brunei. HRH Hassanel Bolkiah was estimated by Forbes in 2011 to have $US20 billion. That doesn’t put him far ahead of King Abdullah bin Abdul Aziz Al Saud, the king of Saudi Arabia, with his $US18 billion.

Our own royal family was recently estimated to collectively be worth over $US1 billion by wealth intelligence firm Wealth X, though only $US510 million of that was held by Queen Elizabeth.

If you take out the royals and deal only with elected leaders of their people, the list of billionaires grows very short.

Sebastian Pinera, an economist and businessman who was elected president of Chile in 2010, has an estimated net worth of $US2.4 billion.

The next richest elected leader is Pakistani president Asif Ali Zardari, who is estimated to be worth $US1.8 billion.

This means, should Palmer win, his $2.2 billion in wealth, according to BRW rankings, will catapult him above Zardari and give him a decent shot of overtaking Pinera should the iron-ore price improve. Palmer’s wealth took a large tumble this year – he was worth $3.85 billion in 2012, also according to BRW.

But, if Palmer were to become prime minister, he could have another rival in the wealthy leader stakes. We don’t know for certain how much Russian president Vladimir Putin has stashed away. But his political opponents say it’s a lot.