Richard Branson: How I founded Virgin Airlines and why you should always be open to new business opportunities 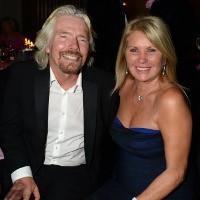 Entrepreneurs must be ready to act on new business opportunities “no matter where you are or what you’re doing”, says Virgin founder Richard Branson.

In a blog post entitled “What not to do when starting a business” posted on Monday, the charismatic entrepreneur said without keeping his eyes open and jumping on the opportunity to move from publishing a magazine to selling records, Virgin wouldn’t exist today.

Branson also shared the story of how a cancelled flight to visit his then-girlfriend and now-wife Joan gave him the inspiration to found Virgin Airlines.

“The whole reason we got into the airline industry was based on an unplanned situation, which at the time was very unfortunate but turned into the opportunity of a lifetime,” Branson said.

“I was trying to get to the British Virgin Islands to holiday with my then girlfriend, now wife, Joan, when my flight was cancelled. Desperate to meet Joan, I chartered a plane, borrowed a blackboard and wrote Virgin Airlines on the top of the blackboard, $39 one way to BVI.”

“I rounded up all the passengers who had been bumped, and filled up my first plane. Annoyed by the experience, I later called Boeing to find out if they had any second-hand 747s for sale and the rest, as they say, is history!”

While not everyone would necessarily get their phone call to Boeing answered, Branson also shared the experience of a friend of his daughter who turned down a potential business deal with a “wealthy friend” because he said he doesn’t “talk business while … on holiday”.

“Had my reaction [when his flight was cancelled] been ‘Sorry, but I don’t talk business while I’m on holiday’, not only would there not have been a Virgin Atlantic, but the Virgin Group would never have found its stride,” Branson said.

Branson says all business owners should “be on the lookout to make connections wherever we go” as “chance encounters can lead to great opportunities”.

It’s a sentiment that paid off for Melbourne entrepreneur Emma Morris, who previously told SmartCompany winning a Virgin competition was the catalyst for starting her vintage clothing business, Round She Goes.

“In my opinion, there aren’t too many defined right and wrong ways to do business, but limiting your opportunities is a sure-fire way to limit your success,” said Branson.

“Remember, it’s fine to take a break, but always be alert.”

And if you spot an opportunity, act on it, said Branson.

“You never know, the person with the skill set you need to get your idea off the ground, or the connection you need to make your business thrive, could be sitting next to you.”