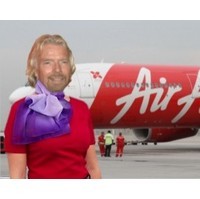 In 2010, Virgin boss Sir Richard Branson made a bet.

He wagered his Formula 1 Racing team would finish higher in the 2010 season than that owned by Air Asia X boss Tony Fernandes, who worked for Branson at Virgin in the 1980s. Whoever’s team won would have to serve as a flight attendant on one of the other airline’s flights. Fernandes took the bet, and won.

Branson will fly dressed as a female flight attendant on Air Asia’s inaugural May 12 flight from Perth to Kuala Lumpur (if this is something you have to see, seats are still selling for $400).

Fernandes is clearly relishing the coup.

“Both Richard and I have come full circle, and who would have thought my mentor will be serving as a flight attendant on AirAsia. It’s an awkward moment when you go down memory lane and recall the times I used to work for Richard. And it’s hilarious to think now, that it’s Richard who will be working for me as a sassy flight attendant.”

“As an AirAsia X’s flight attendant, [Branson] has to comply with our grooming standards and that includes shaving his legs, donning high heels, putting on some makeup and slipping into the AirAsia’s famous red uniform,” he said in a statement.

However, he said, the 62-year-old Branson will be allowed to keep his beard.

“He will be committed to carry out the responsibilities of a flight attendant, including offering coffee, tea and other food and beverages to guests on the special six-hour Perth to Kuala Lumpur flight.”

Branson says he’s a man of his word. “I will dress up and make a splash in the name of Starlight, a fantastic charity. I’ve just got to practise walking in high heels first.”

A quarter of the purchase price of the flight goes to Starlight Children’s Foundation.

Richard Branson is well-known for his marketing stunts, but this doesn’t quite fit his usual modus operandi. For one thing, it’s more of a stunt for major competitor Air Asia rather than for Virgin Air.

“If it’s a good story, one around sportsmanship and integrity, then all of Richard Branson’s brands gain from this, as well as Air Asia.”

However, Posus queried the need for Branson to dress as a female flight attendant.

“If he does dress up as a woman, will he act as stereotypical of an old-fashioned flight attendant in sexist role, or will he just serve passengers in drag? I don’t know how they’re going to play this up.”

Branson’s hero status within his own organisation means it was important for him to follow through on the bet, Posus adds.

“I’m sure he’s aware of his own hero status. He has to constantly be aware of how integrity plays into the cultural symbol that he is. So following through on a bet is pretty required of that.

“That’s why he should probably be more careful about the bets he’s involved in.”