Rupert in the poorhouse? Murdoch’s salary falls at Fox 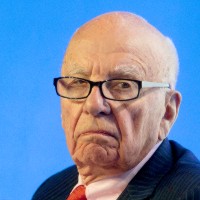 Rupert Murdoch is sharing the pain of hundreds of millions of workers around the world who are seeing their pay rise more slowly than inflation. In fact, falling real wages is one of the great economic issues of our times, and even the great and good, like 83-year-old Rupert Murdoch, is not exempt.

Yes, the executive chair of News Corp and the CEO and executive chair of 21st Century Fox is doing it tough. Figures released overnight show Murdoch had to survive on US$29.247 million in 2013-14, up a miserly 1% from the US$28.9 million the previous year, and still well under the US$30.02 million he earned in 2011-12, which was the last year when News Corp was a single company.

Falling real wages remains a phenomenon in much of the developed world, and over the past few years it has been a particularly nasty aspect to the current American economic recovery — many employees have seen their wages stagnate or go backwards, much like Our Rupert’s experience. The United States consumer price index rose 2.1% in the year to June 2014, and 1.8% in the year to June 2013, but Murdoch’s pay in total has fallen by US$800,000 in the same time.

Murdoch’s pay pain was revealed in the proxy filing for 21st Century Fox’s annual meeting in Los Angeles on November 12, released overnight. The chairman’s US$29.2 million for the 12 months that ended June 30 doesn’t include whatever he earns at News Corp. Previous filings for the split in the empire in 2013 said he would receive a flat US$5 million for the chairmanship at News (we don’t know what he earned in 2012-13 because an annual meeting was never held and a proxy statement was never filed with US regulators). Fox said in its filing that its CEO compensation reflected its financial performance and growth during the year following the corporate split:

“With his guidance during this fiscal year, the company was able to capitalize on its new alignment and strategic focus created by the separation to more effectively and efficiently build on the momentum in its core businesses and benefit from the global demand for premium content.”

Murdoch’s base salary at 21st Century Fox fell to US$7.1 million in 2014, from US$8.1 million for the previous year. His performance-based cash bonus also fell to about US$10.2 million, from US$12.5 million. But Murdoch’s stock awards rose to US$6.3 million in 2014. Also making up the difference was a big change in pension value and deferred compensation, which amounted to US$5.38 million, compared with US$2.85 million for 2013. His other compensation was $280,747 (including US$209,750 worth of use of the company plane). The idea of Rupert Murdoch (and his sons, Lachlan and James) getting share-based awards in Fox verges on the obscene. He and the rest of the family control 38% of the voting shares in the company (but only 14% of the voting and non-voting shares). Those shares are worth more than US$10 billion. They also grab their share of the small dividend flow to shareholders.

Compensation for Murdoch’s second in command, chief operating officer Chase Carey, grew to nearly US$28 million, up 3% year-over-year. James Murdoch, Fox’s co-chief operating officer, handily beat inflation with his total package rising to a juicy US$18.7 million from US$17.02 million the previous year. His salary package is up around US$1.8 million since 2011-12, when James screwed up with the News of the World phone hacking and bribery scandals in London. He has come a long way since then. If you are a Murdoch, you can survive anything in the family company.

And then there’s son Lachlan, the non-executive co-chair of News and Fox. He only started in those roles in March, so he didn’t cream as much. He was paid a total of US$2.078 million in director’s fees, shares and pension. A nice re-start in life at the family company. We won’t know how much he was paid at News until its proxy statement is released.