Rupert, on his LA throne, banishes dissenters from his kingdom 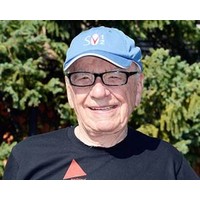 Despite the hype, no one really expected the News Corporation annual general meeting in Los Angeles this morning to sack Rupert Murdoch or transform the way he runs the company. But few could have predicted such a farcical affair.

The point of a shareholder meeting, after all, is to listen to shareholders. And some of the big institutions that own News Corp are pretty pissed off with the way the group is run.

So, the independent directors?—?led by Viet Dinh?—?did their best to lend an ear. But then the guy who really runs the company had his say.

Last week, Murdoch made it quite clear he was tired of shareholders complaining, and tweeted that they should “take profits and sell”. That is, more bluntly, f-ck off.

At the Daryl F Zanuck Theater today, one brave soul enquired whether Murdoch had really meant what he said, and whether they were all wasting their breath by asking for change. Without missing a beat, Murdoch replied that there were many media stocks on the market and if they didn’t like News Corp they should go and buy another.

“When you buy the stock, you know what the company is,” the 81-year-old CEO and chairman continued. “If you don’t like it, don’t buy the stock.”

So there we were in the middle of Fox Studios, surrounded by almost 100 years of movie history. And if I were a film buff I’m sure I could point you to the relevant scene. It’s the one with the king on his throne, surrounded by courtiers who laugh at his every joke. One by one, his loyal subjects approach and throw themselves at his mercy. Praising his wisdom and kindness, they beg to be heard. The king waves his hand, the courtiers laugh again and the petitioner’s claim is dismissed.

At least at the News Corp version, none of the complainers was in danger of being marched off by the black-suited guards to be locked in the dungeon, but their chances of getting King Rupert to cede any of his power were just about the same.

And power is what was at issue here. The petitioners’ fundamental complaint about News Corp is that Murdoch runs it like a family business, and has 40% of the voting power, even though he and his children only own one eighth (or 12%) of the company.

His defence of this arrangement, repeated faithfully by his fellow directors, is that the dictatorship has served the company well and made money for shareholders. And that is certainly true, because the share price has risen 45% in the last year and News is thriving while many media companies are taking their last breath. But Murdoch’s rule has also been responsible for some gross failures of corporate governance (of which phone hacking is one), and for some dodgy deals to buy assets from his family at inflated prices.

Even more to the point perhaps, it is likely to leave the company in the hands of a far less brilliant mini-Murdoch when Rupert finally leaves the throne.

So, a variety of resolutions were presented to this AGM to introduce more checks and balances and more democracy. First on the agenda was a motion to separate the roles of CEO and chairman, so that Rupert’s dominance is reduced. Second was a motion to change the share structure so that all shareholders have a vote. Both came with a huge amount of support from corporate governance advisors and independent shareholders?—?i.e., those outside the Murdoch family.