“Say no to sausagefests”, Mark Pesce calls on his male tech colleagues 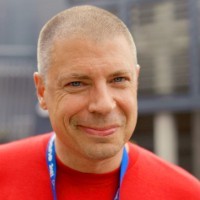 Australian technology inventor Mark Pesce is calling on his male colleagues to join him in boycotting panels that don’t attempt to provide some gender balance.

Writing in his weekly column in The Register, Pesce says, “I won’t be speaking or even attending events where women have been forgotten, excluded, or ignored.”

Pesce says while panels are important because they are “visible” in the community, he felt that mentoring women was also something that males in the industry should do.

“Seek out bright young women. Mentor them,” he wrote in his column. “Give them the access they want and the environment they need to flourish. And if you should find yourself in yet another sausagefest, hold the men there to account. There is another gender.”

While there aren’t many official sources of numbers of women in the industry, statistics from the Australian Computer Society suggest women represented just 28 per cent, (169,500 in total), of Australia’s information and communication technology workforce in 2013.

Pesce told StartupSmart the turning point for him to take action was during Gamergate when he realised that if he didn’t stand up to the problem, he was part of the problem.

“I’ve had to acknowledge that I did not grow up in a time or a place where women could do what they wanted,” Pesce says. “I kept thinking about what I could do to make a positive outcome for everyone, as someone with a voice in IT.”

Pesce says he wanted to make his pledge public so that he was accountable if he ever appeared at a “sausagefest”.

“I want to be transparent and not let myself off the hook on this, and try and develop a way to address the issue that is practical.”

He says he plans on bringing up his pledge with all organisers of events he is invited to speak at, and although it might make some of them uncomfortable – “I guess I’m asking them to ‘check their privilege’”  – he was determined to see his commitment through.

“I don’t have any idea about what it will mean at a practical level,” Pesce acknowledges. “I mean it’s hard to determine what is acceptable – is it at least one woman on a panel, or always insisting on two?

“Those are the answers I don’t have, but I’m certainly going to try and work through it.”

In the meantime, Pesce is hoping others will join him in his quest to try and improve female involvement in the industry.