Slithershanks: When communication is your Achilles heel 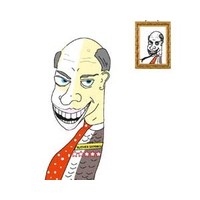 Many people say that Slithershanks is just a waste of space in a grey suit. This judgement, he thought, was grossly unfair. Sometimes he wore a black suit.

Still, there was no doubt that he did occasionally find himself being less than useful. It was on these occasions that he liked to bone up on his classical mythology. Here is one such tale.

Once upon a time there was a young middle manager called Bruce Achilles. Like many semi-mythical figures he had a semi-mythical mother called Thetis, who was a nymph. Her husband, Peleus, liked to comment that this was better than her being a nymphomaniac. But Thetis was not quite so sure.

Anyway, I digress. Mrs Achilles, or Thetis, was very concerned about the family business so she trained her son from a young age to maintain the corporate culture with respect to activating the core values as regards the flexibility matrix (or matrices) of the competitive positioning taking into account the relevant synergies amidst turbulent type-3 environment in which short-term fundamentals will assume the necessary validity and validations.

“Could you repeat that Mum,” said Achilles, a tad confused.

“Sure, my semi-mythical son. Keep your mouth shut and do what I say – or else,” said Thetis, exploring her interactive communication skills.

“No problem, my semi-mythical mother. I will maintain our intergenerational value proposition such that our customer retention is maintained in the top quartile.”

“Very good, my semi-mythical son. And of course if the customers do not want to be retained you know exactly what to do.”

“Run a spear through them?”

“Run a spear through them. Then use them as cannon fodder if you feel like invading Troy, for instance.”

“It’s only what they deserve, my semi-mythical mother.”

Thus all was well in the Achilles family business. But, to be on the safe side, Thetis dipped her son in the waters of the Styx to make him immortal. Trouble is, she had to hold him by the heel, which remained dry.

This failure to manage the process to a Six Sigma standard in respect of removing unwanted variability meant that poor Achilles ended up with an Achilles heel. Would his outcome deliverables be adversely impacted in terms of relevant capital allocations as regards the maintenance of intergenerational brand integrity within a medium term framework? We will just have to wait and see. Or invade Troy. Or something.