Stop pointing the finger at leaders 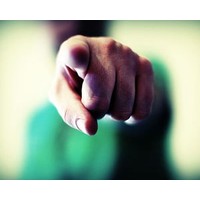 Every day, hundreds of articles are published on the importance of leaders in creating thriving companies and what makes these people of influence tick.

The stories of dramatic turnarounds (or on the other side of the equation collapse) include recognisable names (Steve Jobs, Gina Rinehart) of those we associate with the quality of the company’s vision and strategy.

Although we give these leaders their due, we know their achievements reflect the input of many and have moved on from dated ideas that success results from one great woman or great man.

In most modern companies, inclusive models of leadership are seen as more effective than rigid hierarchies.

Employees are expected to influence decision-making.

Organisational thinkers (such as Collinson and Uhl-Bien) believe that the continued growth of global networks will lead to models of leadership that require even greater openness and power-sharing.

They argue for a more sophisticated world-view of co-creation and co-design, buzzwords in the emerging economy for the importance of the collective intelligence in motivating innovation, among other things.

Leaders of the future, they say, will not need new tools or techniques but a responsive and responsible mindset able to deal with complexity.

There’s a lot to this.

There are many studies on the benefits of tapping collective intelligence. For example, armchair astronomers have been able to discover new planets because planetariums let them access data.

But these are examples of flexible company boundaries rather than redefined roles within company walls.

And what is strikingly absent is discussion about the impact this shift has (and must have) on the need for increased responsibility in individuals across the structure.

Here I am not talking about leaders, but in the absence of traditional structures, the ubiquitously empowered.

“With great power comes great responsibility,” said Spider-Man’s Uncle Ben. This should be applied at every level of the chain.

For all the tomes on what it takes to be a good leader in today’s world there is comparatively little written on the mindset of what makes a good employee.

Surely it includes the same qualities of responsiveness and responsibility? If not to the same extent, given the differences in influence, then at least to some degree?

For one thing, the leader-follower distinction will become increasingly blurred as multi-careerism becomes the norm and at many points in our careers we will be (and already are) concurrent.

In his forthcoming article, “Leadership in the Time of Liminality”, David Holzmer says we are moving away from being rule-abiders to a progressive mindset, but says that to remain truly adaptive we need to be able to embody both areas, depending on the situation.

He says companies will need to be able to respond to ambiguity and view solutions as requiring collective action, and that the “unfettered creativity now called is only found by exploring what is emerging and unknown — within our organisations and within ourselves”.

Clearly, developing this kind of mindset is not something that comes off the back of a promotion.

This is the kind of behaviour that we need to cultivate daily.

And yet how many of us honestly do this?

Some of us are quick to demand of leaders what we are not prepared to deliver ourselves.

A senior executive in a large company recently confessed to me that she lost one of her best people after pulling them up on a potentially damaging strategy decision, their first argument in a working relationship of many years.

The manager left shortly after, ironically citing the boss’s refusal to tolerate difference at the exit interview.

This kind of behaviour sends the wrong message: that you expect a leader to be perfect (impossible for anyone).

Worse, it substitutes the potential for developing true resilience or growth through disagreement with the so-called ‘dummy-spit’.

I’ve put Australian leaders under pressure for lagging when it comes to adopting social technologies, but what has surprised me more is the extent to which many of their support teams remain uninformed.

When I press heads of function or middle managers on how they are keeping up to date with game-changing developments or socializing research to position change within the organisation, few are ahead of the game.

Yet I’m repeatedly asked how they can influence decision-makers up the chain who they see as the blockers.

The first step must surely be to have one’s own house in order.

We must be prepared to cultivate open-mindedness if we demand it and know what is happening, even if others don’t want to hear what we know.

The only way to tell if a culture is truly impermeable to ideas is if we present them in a credible way, persist beyond rejection and continue to press our influence without being overbearing. Timing is critical when it comes to new ideas.

Despite the real differences in power conferred by position (the legal obligations, for example, of a board director), we have responsibility at every stage of our career to embody the mindset we wish to work within.

In saying this I am not absolving leaders of their responsibility for setting the tone or managing difficulty.

I am saying that before we point the finger upwards we take a look at what else we can do, from where we are, to be what we want others to be.

Then we can point the finger to the top.