Sue Morphet goes: Why you have to admire the ex-CEO of Pacific Brands 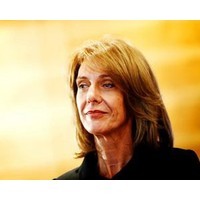 Which would be the fairer headline for Sue Morphet, the CEO of clothing wholesaler, Pacific Brands (ASX:PBG), who resigned today after five years in the top job:

CEO halves her company’s value and delivers three years of net losses in her five-year tenure.

It’s hard not to admire Morphet if you take a good look at the headlines she has faced during her tenure at Pacific Brands, which makes brands such as Bonds, Holeproof and King Gee. The bad news emanating from Pacific Brands has been unrelenting ever since Morphet took the job in 2008.

Today, however, the news was crushing.

Pacific Brands announced a $450.7 million loss on top of a $131.9 million loss last year. A non-cash writedown of $502.7 million in goodwill was the culprit this year. All up, the company has written-off $1.1 billion in the past four years.

Morphet stood down from the leadership role, telling investors at the company’s presentation that five years was long enough for any CEO, and the company needed “fresh eyes”. The new CEO is former Fosters’ leader, John Pollaers.

Morphet has presided over an enormous share price fall for Pacific Brands. When she took over the company it was worth $1.1 billion. Today it is worth $539 million.

Over the past five years, Pac Brands has had net losses totalling $817.1 million. Sales have fallen every year from $2.07 billion in 2007-08 to $1.3 billion this year – a 59% fall in total. This year was the worst for sales, contributing 18% of that fall as the retailer, Kmart, stopped selling Bonds, and moved to its own house brand of underwear and sports gear.

On such financial measures, Morphet’s is hardly a good record.

Any CEO who takes on a company in trouble, takes a risk. If it pays off, it can do wonders for a leader’s career. Ambitious leaders who love a challenge can thrive on turnaround roles if they demand the right circumstances, as experts have pointed out before on LeadingCompany.

The company’s results can, unfairly, reflect on a CEO’s future opportunities, says career consultant Rilla Moore. Although not addressing Morphet’s career specifically, Moore says: “I think the market, investors and analysts are driven by short-term performance and they are very unforgiving if you don’t reach the short-term benchmarks. I would prefer a longer-term view was taken.”

Despite her financial scorecard, Morphet is just the kind of CEO who is much in demand today. Recruiters say CEOs who are willing to take risks, to make changes, and to challenge the status quo are in demand from boards. Nick Waterworth, the managing partner of private C-level search and interim practice, Watermark Search International, told LeadingCompany recently: “[Boards] will say to me: ‘We’ve had someone in the job for five years, and they are okay, but what we want is someone who can rattle the cage, and change things’.”

It’s a mantle that Morphet can claim with ease. She took the tough decisions at Pacific Brands on jobs, factories, brands and outsourcing, as outlined below. The company was ailing when she took it on; at today’s investor presentation, chief financial officer, David Bortoloussi, said the brand that delivers 60% of the company’s revenue are stable or growing, and brands representing only 5-7% are still “at risk”.

Executive career coach, Kelly Magowan, says: “In this climate, you have to take a risk. That is what organisations are looking at.”

Moore agrees that the percentages are on the side of leaders, even when they have had problems. “Most are reemployed,” she says. Many, however, use the moment to re-evaluate their career and take a different path. “People worry about it, and women worry about it more than men because we aren’t quite as adept at reinventing ourselves. But it happens to so many people. It is a matter of pick yourself up, dust yourself off, and spend some time deciding what you want to do. Some people do something completely different.”

When Morphet took the role, Pacific Brands was already in trouble as its local manufacturing sites fell far behind competitors that were outsourcing to China and other low-cost alternatives.

Morphet closed 10 factories, moving manufacturing to China, and cut about 3,000 jobs – nearly 50% of the workforce. Some analysts have argued that the move to China came too late.

The redundancies contributed to the company’s costs, but the worst is now behind the executive.

Under the heading of Project Oyster, Morphet sieved through the company’s hundreds of brands to select the ones that had the most value and growth potential. The company discontinued, merged or sold about 250 brands. Today it has around 40 brands.

In the presentation today, Morphet named the three top brands as Bonds, Workwear (Hard Yakka and King Gee) and Sheridan. Bortoloussi says all three brand have growth potential in the “mid-single digits”.

Despite the relentless bad news, personal attacks and criticism, Morphet stuck at the job for five years. She endured many months of media criticism when the company’s executives received pay-rises of 170% shortly after announcing 1,850 job cuts.

Morphet had to hire security guards to protect her home.

In one media interview, Morphet talked about the personal toll of sleepless nights and anxiety that the cuts had caused her.

However, she did not shy away from the task, and went on cutting jobs and closing factories as required.

Magowan notes: “Five years is an average tenure, so she stayed the course and stuck it out. Sure she had taken some risks and made some mistakes as everyone does, but she has also achieved a lot.”

“She is lucky to have done so in a public company, so people can see the successes,” Magowan says.

Learned from her mistakes

Morphet learned from her mistake regarding the executive salaries. The year following this one, she refused a bonus and gave herself a modest pay cut of $39,000 (even though she was modestly-paid compared to CEOs in equivalent roles.)

Took responsibility and called it as it was

Despite taking over at the beginning of the global financial crisis, being a wholesaler when the whole retail sector is struggling, selling brands when retailers – such as Kmart – are cutting out the middle man and having a stable made up entirely of everyday brands at a time when mid-tier brands are struggling, Morphet has never made excuses. Pointing out that the conditions have been tough, she continued to make decisions and take action in an effort to restructure a company that had moved to change too slowly, and has left it stronger, albeit smaller, than it was before she arrived.