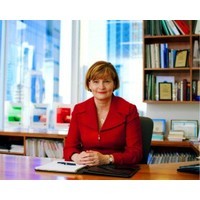 The honour of the country’s top business woman has this year gone to Rosemary Vilgan, the chief executive of Queensland’s $45 billion QSuper, for her work with one of Australia’s largest superannuation funds.

Vilgan was announced as the 2013 Telstra Business Woman of the Year last night at an awards ceremony at Crown in Melbourne, alongside other high profile business women.

Starting as a technical specialist at QSuper in 1990, Vilgan helped it establish a universal superannuation scheme for the Queensland public sector employees and became chief executive in 1998 at the young age of 33.

She was awarded the top prize for her work at QSuper in creating a new superannuation product called QSuper Lifetime, which is designed to better target people at different stages in their life, with varying monetary amounts in their superannuation savings.

Vilgan told SmartCompany the decision to create QSuper Lifetime came after a decade of seeing people hit retirement without reaching their financial goals.

“For a whole decade I was thinking superannuation had to get better at getting people to their goals, not just about accumulating an amount in their account. The GFC was a tipping point for this where we realised people were different and we couldn’t just have everyone getting the one product,” she says.

“QSuper Lifetime has started to separate our membership into smaller groups and try and target the members better, based on age, account balance and the economic market to get them a more stable outcomes.”

The new product was only launched this year, but so far it’s been welcomed by QSuper members.

“We’ve written to the 440,000 members and only half a per cent have said they don’t want this option,” Vilgan says.

“The first group of people we put in compulsorily was the 200 older members with higher balances who are closer to retirement. About 25% said it wasn’t for them, but 75% have decided to stay in this option.”

Vilgan was also instrumental in major structural changes to the organisation which allowed it to be federally regulated in 2009.

On top of being awarded Telstra Business Woman of the Year, Vilgan also took out the Community and Government Award.

Reflecting on her 15 years as chief executive at QSuper, Vilgan had three key pieces of advice for business owners and leaders.

1. Get the strategy right

“For me it’s really about establishing the right strategy for the problems you want to solve, getting the right people and controlling your finances,” she says.

“The number one thing is to be prepared to speak out. You need to have courage and if something is wrong, say so, and inspire your team to act. Whinging doesn’t get you anywhere, you need to motivate people to take action,” she says.

“Get the right people on the bus. Think about if someone in your team was to come up to you and resign, would you be happy or not? That’s the key thing when looking at a staff member, if you’d be happy about them resigning, then something needs to be done,” she says.

“We have a range of different hiring techniques differing upon the level of the person. We get independent testing done for people in higher positions about what we need for the future. We look at whether or not the people have leadership skills, what we’re trying to build and we make sure the person fits with the culture.”

“Really make sure you have control of your business. Look at the possible risks and at the business’s finances. You have a business to run and you need to be able to afford what you’re doing with the budgets and be able to keep on top of the operations.”

The best piece of advice Vilgan’s has received in her career came from her former boss at QSuper, who encouraged her to believe in herself.

“There are a few people who taught me to believe in myself way before I did. My former boss, who is a dear friend, was one of the first ones to say to me I could get to be a CEO and I thought he was kidding,” she says.