“I see you, I hear you, I believe in you”: 10 words that changed Layne Beachley’s life 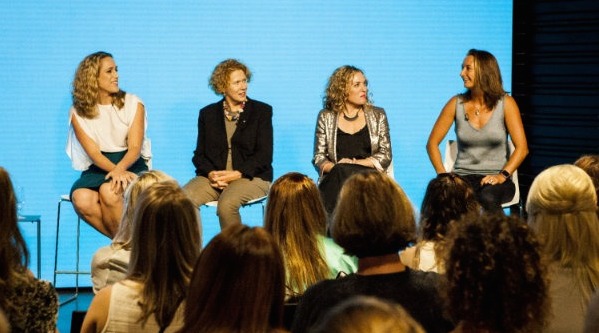 For the first eight years of Layne Beachley‘s surfing career she supported herself financially without any help and it was tough. She had four jobs, working 60 hours a week waiting tables, selling t-shirts and teaching rollerblading to cover the cost of competing overseas. It didn’t leave much time for surfing and was hardly a recipe for international success, but she persisted.

A tiny break came in the very early hours of the morning at the end of a long shift pouring beers. The pub had closed and it was around 2am when her boss came over, handed her $3000 and said 10 words that changed everything.

Speaking to a group of men and women gathered in Sydney earlier this week for her Aim for the Stars Foundation, Beachley said while the money was extremely generous and useful, it was his acknowledgement of her potential that was the real game-changer.

“Those words gave me the confidence to succeed,” she said.

She S H A R E S. Couldn’t get to the event last night. Here’s a bit of advice to keep in your back pocket. ‘Once I shared the challenges I was having with others, I realised it was ok to go through states where you don’t have all your sh*t together’ @laynebeachley #sheshares #lbfoundation #laynebeachley #charity #womensupportingwomen

A post shared by Layne Beachley Foundation (@laynebeachley_foundation) on Mar 21, 2018 at 10:51pm PDT

It was the genesis for her foundation, which has been providing girls and young women with support to realise their potential since 2003.

“A little bit of finance and the knowledge that someone believes in their ambition, is all it takes,” Beachley says.

Because while there’s plenty to be said for being tenacious and working hard towards a goal, Beachley knows it is impossible to give something your all when you are struggling to get by.

Dr Sofia Bartlett, a scientist who does multidisciplinary research on viral hepatitis and HIV infection at the Kirby Institute in Sydney, knows this well. She was a Layne Beachley scholarship recipient from 2016 and spoke about the transformative power of external acknowledgement and support at the She Shares event.

I had the honour & privilege to thank attendees at @LBeachleyAFTS She Shares event tonight on behalf of scholarship recipients! @LayneCBeachley @suzynicoletti @georgiedent Kristy Chong & Liz Ann Macgregor thank you all for sharing your stories! #PressforProgress #TimesUp pic.twitter.com/Zb0lE8xj9X

Bartlett was awarded the scholarship at a time when things were tough: her confidence was down because her experiments weren’t working, financially it wasn’t easy and she was still nearly two years off completing her PhD.

The call from Layne Beachley to say she had landed a scholarship rocked her world in the best possible way. It gave her the motivation and self-belief to not just complete her PhD but graduate with the highest mark possible. She has also just been offered her ‘dream job’ at a research institute in Vancouver which she’ll commence later this year.

The truth is when a person has someone in their corner — seeing them, backing them, believing in them — the world opens up. For Layne Beachley it helped her become the most successful female surfer of all time. For Bartlett, it’s put her at the forefront of scientific research that will change lives.

There are two takeaways to consider: what could you do with someone in your corner and whose corner are you in? Both are worthy of thought, commitment and action. If you need someone in your corner apply for a scholarship (even, perhaps especially, if you don’t think you’ll get it). There are terrific programs, awards and scholarships out there so look into what’s available and put your hat in the ring. It really might change your life.

And keep yours eyes and mind open to who you see, who you hear and who you believe in. They might not know it, and the power of telling them shouldn’t be underestimated.

NOW READ: Layne Beachley on the power of mentoring