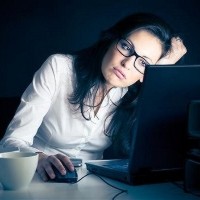 Late nights, loneliness, the banks refusing to back you, 80-hour weeks, lost friendships. Here’s a look at what it’s really like to be an entrepreneur.

There’s no time off – ever

Melbourne business coach Cassie Jene admits she had no idea how much work was involved in running a business.

“I went into this with a big dream, glazed eyes and hoping for cash to roll into the bank as soon as I put my services up for sale. What I didn’t anticipate was no days off on public holidays or sick days, children set your schedule (not the other way around), and that you will be disappointed more often than you can count.

“I’ve also had to put on a brave front and walk into a roomful of strangers in the name of ‘networking’ and invested in lots of training and programs that will help me grow my business, only to realise it will take me a long time to see any returns from it.”

You can’t quit when the going gets tough

When you run into a rough patch, you can’t walk away if it’s your own business. Instead, you’ve got to dig your heels in and push through the rough terrain, says Sharon Zeev Poole, the founder of Agent99 Public Relations.

“Also, if you plan on having a family at some stage, you can’t just take 12 months maternity leave. I had to go back to work two-and-a-half months after having my child, which was such a shock to the system,” Poole says.

There’s lots of mundane stuff to do

There’s a huge amount of mundane tasks like filing, administration, accounts and creating operating systems to be done, points out Samantha Dybac, founder of brand and PR firm Sammway.

“As an entrepreneur or someone starting out in business, you’re the person who does everything, including the mundane stuff. The challenge is that these areas build up and can become all too overwhelming to even find a place to start.”

Adelaide man Michael D Russo wishes he was told just how poorly a ‘recovering millionaire’ (bankrupt) is actually treated. He built his first multi-million dollar business in his mid-20s before losing $3.5 million in the GFC in 2009, ending up bankrupt.

“They don’t tell you how difficult it is to get loans and rebuild afterward. They don’t tell you about the emotional cost of bankruptcy, or how having an attitude of ‘failure is part of success’ doesn’t actually do anything practical for you to help you pay the rent, bills and buy food for the family,” the founder of Solar Coach says.

“And they don’t tell you about the feelings of self-worth and depression that follow, or provide any strategies to get back on your feet.”

You get sick more often

Constant sickness is a way of life for the founder of Cascada Eco Textiles, Robyn Gibbes.

“I travel to Bolivia every year, and though I’m really careful about what I eat and where I eat, I’ve always become quite violently ill. To the point where I’ve lost my gall bladder due to parasites and, as a result, I have some health issues.”

During trips overseas to her factory, Gibbes is constantly hooked up to an oxygen bottle, both at the factory in Bolivia’s El Alto and beside her bed at night.

“I don’t think anyone could expect that when embarking on a new sustainable homewares label.”

When Wilhelmina Ford started dog boarding business Doggy Pause seven years ago, she thought she could make the business fit her lifestyle. But the reality early on was that it was the other way around.

“Until recently, I had created a job, not a business. I spent many weekends looking after the dogs and business instead of out with friends, many early mornings, late night calls, counting dollars and working seven days a week.”

The business has expanded three times and she now has staff to help out, easing the load.

You can forget the pleasures

Stylerunner founder Sali Stevanja used to have time to get along to massages every week and manicures and pedicures, but it just doesn’t happen anymore.

“Not only do I have no time to get there when businesses are open, I also have to watch the money I do have. Startup life doesn’t mean you’re rolling in cash, which outsiders seem to forget. Everything we make goes directly back into the business. I’ve only just started paying myself a wage in the last six months, and I get paid less than the juniors.”

You’re on the phone a lot

Denis Merkas didn’t really expect that by setting up a service-based business, he would have to be tied to the phone for 15 hours a day.

The founder of a mobile massage business trains staff and runs the phone bookings.

“People often want a booking ‘now’, so answering machines aren’t an option, and given the complicated nature of the booking process, I can’t outsource the phones to just anyone. It needs to be someone trained, which leaves me with limited support. Because I run the phones from 8am to 11pm most days, it restricts me from doing things like going to the beach, going to the theatre or even having meetings without interruption.”