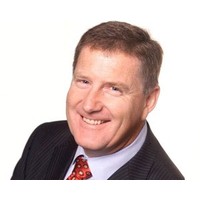 Taking the CEO reins of Aussie Group in August 2008 amid the global credit crisis was never going to be a cakewalk – as Stephen Porges was all too aware.

“The finance sector was obviously under massive threat from the GFC so it was a real challenge,“ Porges says of his decision to join Aussie after two decades in international banking, stockbroking and investment banking – including seven years as New York-based managing director at global banking heavyweight HSBC, plus a stint heading up Newcastle Permanent Building Society. “But I always love a challenge in business: to look at things that stretch you a bit.”

It’s just as well, really, given the housing market is still awaiting a rebound, and given he oversees 900 brokers, a loan portfolio topping $53 million and relationships with 18 lenders. Aussie is now a division of one of the big banks – the Commonwealth – that it was originally set up to take on.

Being in the lending game during a prolonged lull in business and consumer confidence calls for a leader with backbone. “The buck stops with me,” Porges says. That means it falls to him to deal with the public reaction to CBA becoming an 80% shareholder in December 2012, up from a 33% share in 2008. Does he feel the need for damage control, especially given the 21-year-old Aussie brand always moved to differentiate itself from the big banks?

“No,” Porges says. “There was some confusion at the start from both staff and partners as to whether we’d simply become a CBA shop. It is, however, absolutely 100% business as usual. Having a very solid partner behind us, that understands and values what we do – that is, providing in every situation the right product for the customer, for their unique situation, irrespective of the provider – simply means we’ll be a stronger competitor. Standing up for the consumer always has been, and will continue to be, in Aussie’s DNA.”

Preserving customers’ faith becomes an issue during high-profile ownership changes, and Porges is keen to tackle it. “Customers have given us their trust. We’re very aware of that and the responsibility that brings. I’d hope that we’re judged on how we’ve performed with customers in the past and how we’ll continue to do so in the future.”

His message to the naysayers who feel the Aussie brand offering is under threat given greater CBA ownership: “judge us by our deeds”.

Porges reckons an uptick in the housing market is on its way, given historically low interest rates and better infrastructure allowing faster commutes. “Australia’s in an interesting position,” he says. “From a national position, there should be more consumer confidence, given the outlook.”

Whether Aussie will be a leading player when the market heats up again remains to be seen. “We have partnerships with just about all the major financial institutions in Australia,” says Porges. “The real challenge is how to grow as a mainstream financial services provider.

“We don’t see ourselves so much as a competitor to the small, single line non-banks. We’re making sure that we’re delivering a premium service for our customers across a broad range of products.

“The days of just wanting a single product from a financial services provider are gone. People want advice and they want to know that their entire financial position is safe, secure and easy. This means our strategy is to make finance understandable, easy and available to mass Australia.”

Constantly bouncing ideas off founder and executive chairman John Symond – they talk about three times a day and have offices next to each other – is key to Porges’s leadership style. “We get on very well. We have very similar views about the business. John’s a very straightforward, rational guy, a very hands-on chairman with experience in what mainstream Australians need and care about.”

Porges meets his executive team informally once a week, and formally each fortnight. “It’s a constant conversation with them about restructuring and growing and I love watching my team develop and do well,” he says. “I make sure they know what they’re responsible for and give them enough freedom to get on with it, while giving them a vision and being a mentor.

“Also, there’s also a very strong informal CEO network around town for not necessarily business-specific issues, but more about how you’re managing a situation or what you’re seeing and thinking. We get to together and regularly have lunch.”

Drawing from a wide arc of experience has been integral to sharpening Porges’ strategy skills. The agricultural science and MBA graduate from Sydney Uni, who has a PhD in genetics and animal husbandry, has trodden an unconventional path to finance management, working in retail stockbroking, being a founding partner of recapitalisation firm Cabonne Partners and becoming CEO of ASX-listed biotechnology company, Proteome Systems and of digital services provider Hyro Limited.

The father of three says working for HSBC in Manhattan during the September 11, 2001, World Trade Centre attack, in which he lost friends, prompted the family’s return to Australia and the taking up of the Hyro Limited CEO role. He joined the board of the Australia and New Zealand Breast Cancer Trials Group in 2010.

“I think I have very broad experience across a whole range of sectors, retail financial services, investment banking, biotechnology, business banking and I’m thoughtful about the big picture. I’d define myself as a situational leader: you look at what you’re dealing with and respond depending on the environment you’re facing at the time.”

Stephen Porges on his role models

“He has a unique skill of knowing exactly what issues and concerns resonate with mass Australia. This grounded view has continued despite obvious success.”

“Her ability to stay bipartisan and informed with strong views across an incredibly broad range of subjects is extraordinary.”

“Similar to Heather, he has an ability to be informed across an incredibly broad range of issues and industries. This combines well with always being able to identify the important facts in a large problem to keep focused on outcomes, not just [being focused on] interesting theoretical discussions.”