Searching for a CEO: who will be Microsoft’s new leader? 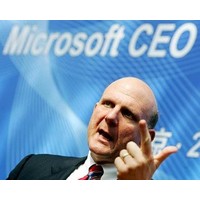 Microsoft is hunting for a new CEO, and five months after Steve Ballmer agreed to retire, the search continues.

There are some key reasons why potential CEOs being considered for the post may think twice about accepting the leadership of one of America’s top corporations.

The immediate problem is the potential for boardroom interference, as the incoming CEO attempts to navigate a new strategic direction for the company, especially if founder and former CEO Bill Gates, and outgoing chief Steve Ballmer continue as directors.

This is compounded by the fact that a few days after announcing his resignation as CEO, Steve Ballmer bought Nokia Corporation’s mobile phone business for US$7.42 billion.

Nokia already used Microsoft’s Windows operating system in its Lumia phones, but entering the global smartphone market, in direct competition with Samsung and Apple is a huge strategic gamble for Microsoft.

And managers and investors are anxious. Even in Nokia’s homeland Finland, Apple has 35% market share, and Nokia only 25%.

Hurt by criticism that he lacked strategic vision and drive, Ballmer also launched a last minute major corporate reorganisation that might have been better left to his successor.

How can an incoming CEO objectively assess the viability of all this – and conceive a fresh strategic future for Microsoft – when the principal architects of the company’s past are sitting in the boardroom? Inevitably, rigorous analysis and criticism will be muted. Any substantial change in direction becomes less likely.

This is exactly what happened more than a decade ago when Bill Gates resigned as CEO, handing the baton to Steve Ballmer. Though they were old friends from Harvard, the tensions between them were palpable, and other directors were required to intervene.

Yet the board of directors is what connects corporate governance and strategy. The vision and vitality of the board is critical in making careful strategic choices, which will be informed by changing global markets, transforming technologies, and the proliferation of ideas and possibilities internally generated by the company.

This is the reason why there is a general governance rule against CEOs becoming Chairs after they retire as CEO, or even joining the board of the company as a director. Though US boards are packed with CEOs of other companies, only eight S&P 500 companies have two former CEOs of their own as directors.

“No CEO worthy of the title wants his or her predecessors second-guessing everything in the boardroom,” former Apple executive Jean-Louis Gassée said.

The experience of other CEOs who have hung around as directors of the company they once led has often not been happy. They invariably wish they were still running the show, and are perceived as either obstructing the new CEO, or attempting to second guess them, however much they may be trying to help.

But the principle of not cramping the new CEO by surrounding them with former CEOs has to be balanced with the unique knowledge and clout former executives might contribute. This is why it is likely Gates will continue as Chair for some time yet.

The trouble with Mr Morfit

Another problem for Microsoft’s incoming CEO will be activist hedge funds demanding dividends and share buybacks, just as Apple has had to contend with in the last year.

With a US$2 billion investment in Microsoft, hedge fund ValueAct has placed its president, G. Mason Morfit, on the company’s board, where he is expected to strenuously press his views.

Carl Icahn’s insistence that Apple buy back US$150 billion of shares in 2014 would have seen the company’s accumulated cash pile wiped out.

Later, Icahn reduced his demands to a US$50 billion buyback. Apple had already committed to a US$100 billion buyback and dividend program following earlier hedge fund activism.

An enormous buyback that some hedge funds insist on would not help Microsoft. Rather, it would eliminate any realistic possibility of the company making strategic acquisitions, developing new technologies, or engaging in radical new product or market development.

That after a timid dance, the CEO of Apple Tim Cook is now standing up to Icahn and the hedge funds is heartening.

But the question remains: will the incoming CEO of Microsoft have the intelligence, energy and determination to turn the company around and restore its glory days of innovation and excitement? Or will they simply transition what is often perceived as an outdated company bereft of inspiration into a cash cow for the stock market to milk into extinction?

Thomas Clarke is professor of management and director of the Key University Research Centre for Corporate Governance at the University of Technology, Sydney.