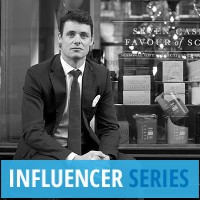 Aesop’s chief executive, Michael O’Keeffe, is giving me a tour around the business he has grown from a minnow to a globally recognised cosmetics brand, securing himself a nomination for EY’s Entrepreneur of the Year awards in the process.

Aesop was founded by Dennis Paphitis in 1987 but since O’Keeffe joined in 2003 (he and management have a 10% stake) it has really taken off, turning over $95 million last financial year.

In 2010 Aesop brought in private equity investors and then in 2012 it was bought by cosmetics giant Natura for $68 million.

The head office is indicative of a business where nothing is left to chance: everything is calm and carefully curated.

Taking Aesop to the next level is all about these sort of details, according to O’Keefe:

Culture for us domestically and globally is really important. Culture is values and behaviours but also symbols.

Something as small as the pen that people use sends a signal in terms of how we expect things to be done and the level of quality and people.

Whether you are in back office in Melbourne, Tokyo or New York you have to feel a strong connection to the company and the way we do things. Those values around attention to detail and excellence and general meticulousness shouldn’t matter whether you are on the shop front or in a warehouse.

Starting off as an engineer you learn to problem solve in a very specific environment and a lot of business is about solving a lot of different problems.

The business was founded in ’87, but until I started the business was purely focused on wholesale. Dennis had some ideas about direct retail but when I came on board, working together, we were able to pull that together.

Dennis and I have now worked together for 11 years and I think when the creative side and the commercial side come together it is a really powerful combination.

At Aesop, design and creativity is very important and you don’t want to compromise that just for a commercial outcome. But nor do you want to focus on something that is creatively interesting but the customer isn’t interested in.

At the end of the day it is about trust.