The politics of Clive Palmer’s billions 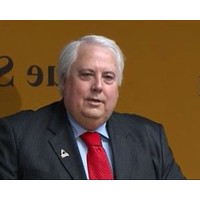 Millionaires are more common in Australian politics than most voters would think. There is a good reason for our obliviousness – our politicians like to play down their wealth.

In America wealth is celebrated or even worshipped but the tall poppy syndrome is alive and well here, which poses a conundrum for billionaire Clive Palmer, Australia’s fifth richest man, with wealth estimated to be $5.05 billion according to BRW magazine.

Palmer is not known for mincing his words and recently accused the Greens of having been infiltrated by the CIA.

When he announced his bid for Coalition pre-selection, including a withering assessment of current treasurer Wayne Swan, he also announced his intention to build a modern replica of the Titanic.

Even in the United States politicians can rub voters up the wrong way with their wealth.

Presidential candidate Mitt Romney for example hasn’t endeared himself to America’s working poor with comments about enjoying sacking people and gloating about his collections of cars and houses.

Being successful in business is a good credential for pre-selection to the Coalition, which likes to represent itself as the party of business and likes to point to the Labor Party as the representatives of unions and socialist ideals.

When it comes to public perception Australians are discriminating says lobbyist Jody Fassina.

“People will ultimately ask the question: ‘Does Clive want to enter politics to serve the public interest or to serve his own interests’,” Fassina says.

“That is the threshold question he needs to overcome.”

Palmer can take heart from LeadingCompany’s list of current and former politicians with bulging bank balances but he might benefit from a look at how they have handled public perceptions of their fortunes.

Therese Rein, wife of the former PM, may be the person responsible for the family’s wealth but her business acumen makes Rudd one of the two wealthiest people in today’s federal parliament along with Malcolm Turnbull.

Rein sold her business interests in Australia when Rudd won office and set up in the United Kingdom where her company, Ingeus, provides employment services and is reported to have recently won contacts worth an estimated $1 billion over five years.

As the country’s leader Rudd was careful to portray Rein’s success as stemming from humble beginnings, repeating stories about her getting a small bank loan ($10,000) to start her company.

Once leader of the Coalition, Turnbull has been on and off the Rich List, with his fortune estimated at around $168 million.

The merchant banker-turned-businessman was an investor in OzEmail, one of the earliest internet service providers, which secured him the bulk of his fortune. His business background gives him credibility with voters but it has also been a headache.

He was embroiled in a Royal Commission into the collapse of insurance company HIH and had civil action brought against him by HIH liquidator McGrathNicol.

Premier of Victoria Ted Baillieu comes from a pedigreed family of fortune.

The Baillieu family is worth $405 million and is a member of Victoria’s circle of super-wealthy family dynasties that includes the $2.01 billion Myer family and the Besen family, worth $2.08 billion, according to BRW.

Baillieu’s business connections have come too close a few times, most notably when the Liberal government of Jeff Kennett closed and sold off 350 schools and handed much of the realty business to the family real estate firm Baillieu Knight Frank.

The one-time leader of the Coalition and Prime Minister between 1975-1983, Fraser was born in the posh Melbourne suburb of Toorak to a family with a history of political involvement and pastoral wealth in Victoria’s western district. His father John had properties in the Riverina region in New South Wales.

Fraser’s wealthy past came back to haunt him when he said in a speech that “life wasn’t meant to be easy” at a time when unemployment was at record highs. The full quote, originally from playwright George Bernard Shaw, is: “Life is not meant to be easy, my child; but take courage: it can be delightful.”

A Queenslander who was raised on a cattle station, Moore’s political career culminated in his role as a cabinet member in the new Coalition government of John Howard in 1996 where he was industry, science and tourism minister.

Before entering politics he had a successful career as a stockbroker and professional company director.

He started a stockbroking firm which became the largest single trader business in Queensland and had barely taken his ministerial seat when his business and political careers collided because he had retained shareholdings in technology and share trading companies that could have posed a conflict of interest.

He was nearly forced to resign for breaching Howard’s code of conduct but managed to hang on. He was left out of a cabinet reshuffle in November 2000 and resigned in 2001.