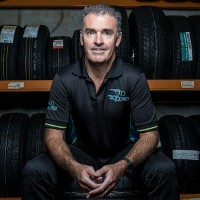 As the chief executive of multimillion dollar outdoor advertising company Adshell, Steve McCarthy had already built a hugely successful career before he started to think about launching his own venture in 2011.

Likewise, his business partner John Shim had spent 24 years as a consultant at PwC, where he’d worked his way up to partner.

But it was a chance to build something on their own that enticed the two friends, who’d met years before when Shim headed up an audit team for McCarthy, to quit their comfy corporate gigs and throw their energy into building a business.

“I was looking at some opportunities to get into a business of my own,” McCarthy says.

“And at the same time, John was going through the same thought process. So we kind of looked at each other and thought ‘we’re probably better off doing something together than we are on our own’.”

Having looked at a number of business opportunities including training organisations and various manufacturing and media businesses, it was Shim that hit upon the pair’s golden idea while sitting for hours on a plastic chair, in the cramped waiting room of a tyre service center.

“He was going through the process of getting his tyres fitted, and he called me the next day and said, ‘I’ve just had a really average experience as customer’,” says McCarthy.

“I certainly wouldn’t have put buying tyres in the top five things I’d ever experienced from a customer perspective, but John was very serious about saying, ‘there must be a better way in this day and age’.”

The pair launched Road Runner Mobile Tyres, a mobile business that services, fits and aligns tyres, in 2012 with the idea that customer service and convenience could shake up the archaic tyre industry.

But McCarthy admits even with a niche idea and years of experience in the corporate world, launching his own business was not going to be like steering Adshell – a company he’d helped grow into a $130 million business in 10 years.

“The big difference between being an entrepreneur and those corporate-type roles is where the money comes from,” he says.

Two years on and the gamble to go it alone has paid off for McCarthy and Shim, with Road Runner Mobile Tyres now turning over $2.5 million annually and boasting more than 10,000 customers across operations in News South Wales, Victoria and Queensland.

McCarthy sits down with SmartCompany to share the secrets of a strong business partnership and why being a business owner, rather than a chief executive, means wearing many more hats.

One of the many ways McCarthy and Shim complement each other as business partners is by being on opposite schedules.

“It’s a fluke,” laughs McCarthy. “I’m the morning person and John is a night owl.”

McCarthy will get to the office as early as 6.30 or 7am to check on his team on the road, while Shim in known to pull late nights.

“Quite often he’ll be sending spreadsheets at 2am and I’ll be replying 5am – it works really well,” he says.

The pair generally split their daily tasks down the middle, with Shim using his financial expertise to head up shareholder relations and cashflow, while McCarthy takes a lead on customer relations, sales and marketing.

“To be honest though, we just get in and do it. There’s no grand master plan, it’s just who is there at any given time,” he says.

McCarthy says it’s that mutual respect and trust of each other’s judgment and abilities that is key to a successful business partnership.

“The starting point needs to be a strong level of mutual trust and respect. I respect his skills and attributes and what he brings to the table and what he’s done, and he respects me. That gives us the strong footing to start with,” he says.

“The other important thing is having lots of open and honest conversations, there’s nothing that happens in our business that we don’t talk through. And then lastly, when you do go through issues, you both got to be able to have a bit of laugh and enjoy each others’ company.”

Coming from large corporate environments, McCarthy says the pair had to learn how to function with smaller teams.

“[As chief executive], we used to have white board sessions and put a lot of different initials next to different tasks that needed to be done. Now, there’s only so many initials to put on the board – you have a lot of balls in the air at any one time as business owner.”

“There’s no doubt we would not have achieved what we have achieved on our own. Because the reality in business is there’s just too much to do,” he says.

McCarthy says he manages his work-life balance with the help of his supportive partner, but admits its something that any entrepreneur struggles with – especially in the first few years of business.

“No one gives you something for nothing, so if that means we work a little harder in first years, then so be it,” he says.

When he does get some down time, McCarthy says he likes to prioritise exercise for his physical and mental heath.

“I’m a runner and I also play old man soccer,” he laughs

The last two years have been about laying “the bedrock” of the business, according to McCarthy, who says the near future will be about growing the business into Perth, Adelaide and Canberra.

“I think from our perspective, we do see ourselves as being a national business,” he says.

For a business that is strictly focused on delivering a great customer experiences, McCarthy says he would not rule out the option of one day franchising the businesses, but would not do so at the expense of consistent company values.

“The franchise opportunity is certainly there, but what’s really important to us is to grow off the back of great customer service,” he says.

And for the pair of entrepreneurs themselves, McCarthy says he and Shim are both “very much committed” to the business in a long-term sense.

“Will I be in tyres at age 75? Who knows? But I will probably be doing something – there’s too many hours in the day to sit around looking at the water,” he says.