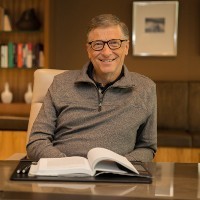 Jokes about scientists, an explanation about how statistics can be manipulated and arguments about the sustainability of eating meat are just some of the topics on Bill Gates’ reading list this American summer.

The billionaire co-founder of Microsoft puts out a list of book recommendations this time each year and his endorsements usually carry weight: the books climb up the bestseller charts as soon as Gates spruiks them on his personal blog.

This summer Gates has picked seven holiday reads, making an effort to “pick a few more things that are on the lighter side” compared to last year.

“Each of these books made me think or laugh or, in some cases, do both,” Gates says.

How to Lie with Statistics by Darrell Huff

Gates has already made it known how much he likes this book for investors, having recommended it to everyone at TED earlier this year.

Huff’s book for investors was first published in 1954 but Gates says apart from a couple of examples that are no longer relevant, he says the book “doesn’t feel dated”.

“One chapter shows you how visuals can be used to exaggerate trends and give distorted comparisons—a timely reminder, given how often infographics show up in your Facebook and Twitter feeds these days,” Gates says.

“[This books is] a useful introduction to the use of statistics and a helpful refresher for anyone who is already well versed in it.”

Hyperbole and a Half by Allie Brosh

Gates promises readers will “rip through” this book in just a few hours, “but you’ll wish it went on longer because it’s funny and smart as hell”.

The book is based on Allie Brosh’s popular Hyperbole and a Half blog, which is part-comic and part-memoir, told in short vignettes about her life.

“The adventures [Brosh] recounts are mostly inside her head, where we hear and see the kind of inner thoughts most of us are too timid to let out in public,” Gates says.

“I have interrupted Melinda a dozen times to read to her passages that made me laugh out loud.”

The Magic of Reality by Richard Dawkins

Gates describes Dawkins’ book as “an engaging, well-illustrated science textbook offering compelling answers to big questions, like ‘how did the universe form?’ and ‘what causes earthquakes?’”.

“This book is as accessible as the TV series Cosmos is for younger audiences—and as relevant for older audiences,” Gates says.

“It’s also a plea for readers of all ages to approach mysteries with rigor and curiosity.”

“Dawkins’ antagonistic (and, to me, overzealous) view of religion has earned him a lot of angry critics, but I consider him to be one of the great scientific writer/explainers of all time.”

What if? and XKCD by Randall Munroe

Gates has included two books by Randall Munroe on this year’s reading list: What If? is full of Munroe’s answers to “absurd hypothetical questions” from all fields of science and XKCD is a collection of cartoons that poke fun at scientists and computers.

In What If? Gates says Munroe provides funny answers to the questions, but “the science underpinning his answers is very accurate”.

“It’s an entertaining read, and you’ll also learn a bit about things like ballistics, DNA, the oceans, the atmosphere and lightning along the way,” he says.

When it comes to the jokes in XKCD, Gates says not everyone will love Munroe’s sense of humour, but he definitely does.

On Immunity by Eula Biss

Gates says he thought this book from Eula Biss would be a worthwhile read but he had “no idea what a pleasure reading it would be”.

“Biss, an essayist and university lecturer, examines what lies behind people’s fears of vaccinating their children,” Gates explains.

“Like many of us, she concludes that vaccines are safe, effective and almost miraculous tools for protecting children against needless suffering. But she is not out to demonise anyone who holds opposing views.”

“This is a thoughtful and beautifully written book about a very important topic.”

Should We Eat Meat? by Vaclav Smil

Gates admits this book is “probably the least beach-friendly” book on his list but says it is a “timely” read.

“How do we square the circle? Vaclav Smil takes his usual clear-eyed view of the whole landscape, from meat’s role in human evolution to hard questions about animal cruelty.”