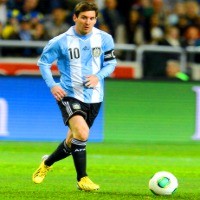 The World Cup has reached its finale, with Argentina set to take on Germany in the final on Monday morning (AEST time), so SmartCompany has decided to tease out a few fun facts and figures.

Biggest rise in value: Colombian star James Rodriguez was not exactly unknown before this World Cup. The 23-year-old had already made a $70 million move from Portuguese club Porto to Monaco, a club which plays in France’s top division, Ligue 1. But his performances over the past few weeks have pushed up his transfer market valuation to Cristiano Ronaldo and Gareth Bale levels, with Spanish moneybags Real Madrid reportedly drafting an offer somewhere in the vicinity of an eye-watering $100-110 million.

Biggest drop in value: Wayne Rooney was once the boy wonder of English football, but another middling World Cup and an indifferent season with Manchester United have put a big dent in the market worth ($65 million) of the 28-year-old. His days as the great white hope of England are behind him and Manchester United’s new manager, Louis van Gaal, might well decide to cash in while the goings still reasonable. A Beckham-style payday in the USA might be in the offing for Rooney.

Best industrial dispute: The 2014 World Cup produced its own peculiar version of an industrial dispute when the government of Ghana had to fly in $3 million in cold, hard cash to make sure its players took to the field for their match against Portugal.

In scenes reminiscent of the infamous OJ Simpson SUV chase, a convoy of armoured vehicles carried the cash from an airport to the team’s camp, after the cash had been flown from Ghana on a chartered flight. The Ghanaian government explained the disagreement was about the mode of payment for players, with the government preferring e-banking while the players wanted cash-in-hand payment.

Biggest collapse: Germany did a number or seven on home team Brazil in the semi-finals, breaking the hearts of close to 200 million people. Brazil has spent about $11 billion on hosting the World Cup, which has provoked discontent and unrest among a vocal minority of its population.

The 7-1 loss to Germany in the semi-final was notable for a few things: it was Brazil’s first competitive match loss on home soil since 1975; German forward Miroslav Klose edged ahead of Brazilian legend Ronaldo for scoring the most goals, 16, in World Cup finals; and Germany eclipsed Brazil as the highest scoring country in World Cup history. Quite the trifecta for the team known as Die Nationalmannschaft.

How’s that 100-year plan going: Japanese corporations are well known for their long-term planning: after all, Panasonic is only 82 years into its 250-year plan. So it’s not that strange that the Japanese Football Federation is meticulously ticking boxes as it winds its way along a 100-year-plan designed to make Japan world champions by 2092.

In the context of 100 years, Japan’s failure to qualify for the second round stage at Brazil 2014 is surely merely just a micro-step to eventual greatness.

Best WC ad campaign: There were a lot of epic World Cup TV ads, including the campaigns by Budweiser, Coca-Cola and ESPN, and even one from Banco de Chile that featured the trapped Chilean miners letting viewers know that Chile’s team would not be afraid of the “Group of Death”. And then there were those Mark Schwarzer ads for TAB – just plain weird.

But for sheer fun and verve, McDonald’s probably takes out the prize for its GOL! TV ad campaign in which some talented everyday-looking folks (including one woman in impressively high heels) pull off some pretty insane trick shots. It’s not an especially new genre, but the visuals, music and set-ups make it work. (However, French comedian Remi Gaillard is still the king of this kind of thing.)

The SME most-with-least award: Costa Rica, ranked 28th in the world by FIFA coming into the tournament, managed to get out of a group that included three former World Cup winners – Italy, Uruguay and England – before making their first World Cup quarter-final. Los Ticos then beat former European champions Greece before succumbing to the Dutch in a nail-biting penalty shootout.

Costa Rica’s performance was a great example of how a disciplined team playing to its limits could take on the big boys. To put their achievement in dollar terms, Costa Rica’s squad has an estimated transfer market worth of $43 million; compared to Uruguay ($314m), Italy ($467m), and England ($483m).