The world’s most powerful businesswomen according to Fortune 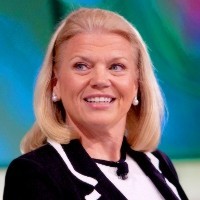 When Fortune released its first list of the world’s most powerful businesswomen in 1998, most of those featured came from creative fields like media and publishing — and as it noted at the time, none who were heading up top “blue chip firms” .

That’s changed this year, with Fortune’s 2014 list revealing a record 24 female CEOs, meaning almost half the total number of the women are heading up huge companies, and working hard to transform their businesses.

Or as Fortune’s Alan Murray put it, “The women who survive the hyper-Darwinian struggled to the top are a formidable group … [who’ve] been handed some exceptionally tough assignments”.

Topping the list for the third time is IBM chair Ginni Rometty, despite IBM’s 5% revenue decline for the second year in a row.

Westpac CEO Gail Kelly was one of only two Australians to place on the list of Asia Pacific’s most powerful women. She was recognised for both keeping the bank’s $38.5 billion revenue rising and for making significant contributions to gender parity in senior management positions within the company, which now sits at 42% female — up 10% in four years.

Alison Watkins, the managing director of Coca-Cola Amatil and one of only four female CEOs of Australia’s top 50 ASX listed companies, came in at number 21 on the Asia-Pacific list. She took on the role at Coca Cola Amatil after leaving GrainCorp earlier this year.

There were a number of women who are working in top positions in tech who placed high on the list: Hewlett-Packard Chairman and CEO Meg Whitman took the 6th position, while Facebook’s Sheryl Sandberg, who came in at number 10, was also the highest earning woman on the list, taking home $38 million in 2013.

Marissa Mayer, CEO of Yahoo, who placed 16, was the second highest earner, and also the youngest woman on the list at age 39. Recently appointed CEO of YouTube, Susan Wojcicki, came in at number 19, while Ursula Burns, CEO and chairwoman of Xerox came in at number 17.

Below are the top 25 women in business in America:

And the top ten most powerful women in business in Asia Pacific: